Super Simple Start On The Aspects In Astrology…

Relationships formed between the planets... 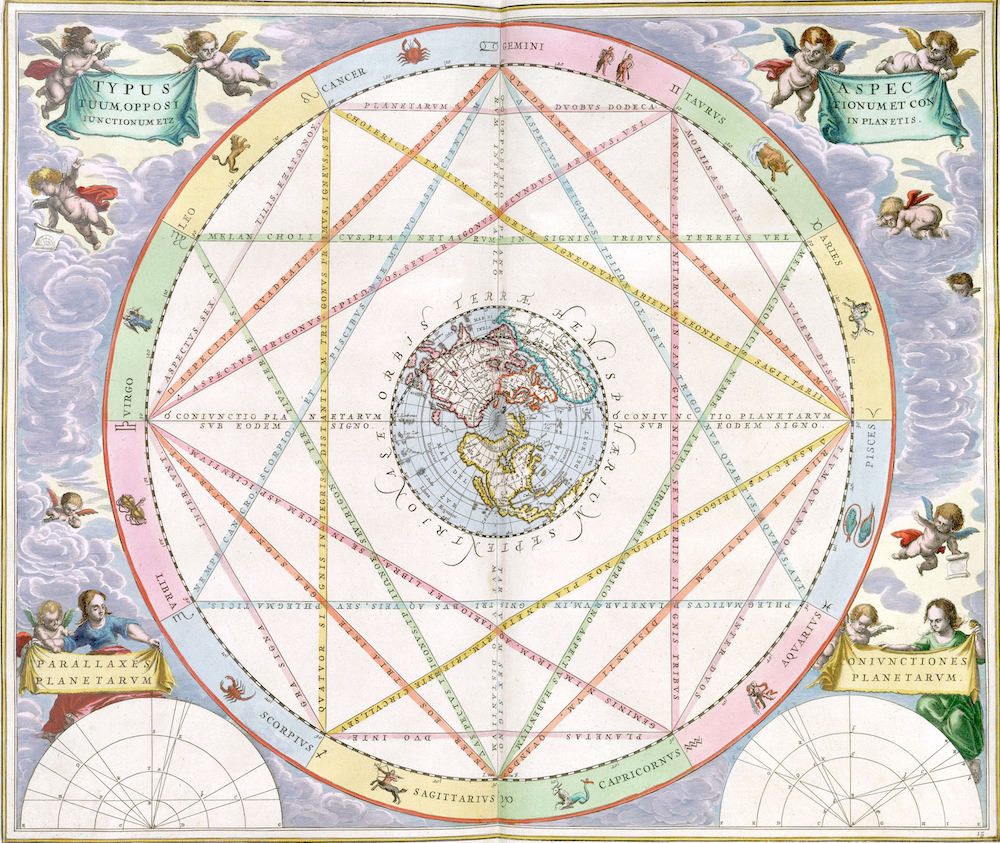 You may be ready to start learning about the aspects in astrology, which all boils down to how many degrees appear between the planets and the shape they make in the chart.

Perhaps when you bring up your chart you see a triangle formed, or maybe two of the planets appear at a right angle, which is known as a square.

There are five major aspects to know about, as you dive into your chart: 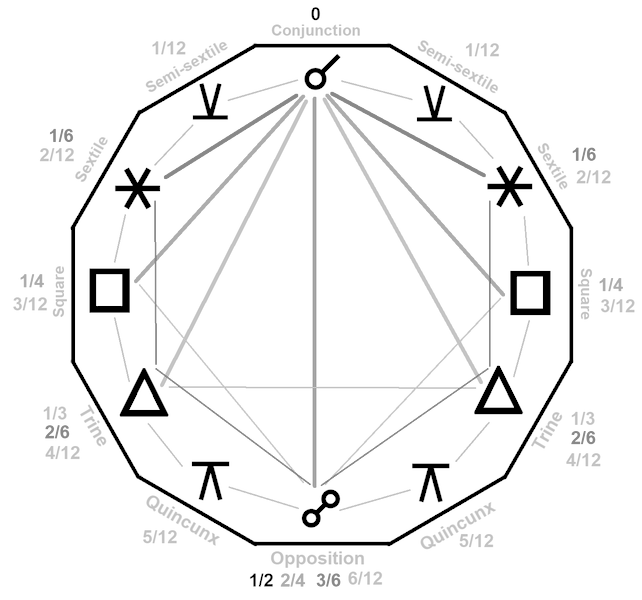 I’m no maths whiz (terrible, in truth) but even I quickly picked up on this principle of angles, so I hope you find it Very Easy too!

Try not to think of these as ‘good’, ‘bad’ or ugly! Aspects are not lucky, auspicious or damning, they simply describe a way for us to understand the way energies come together.

Many positive things can come from challenging circumstances – the best ideas are born from strife, while getting ‘carried away’ isn’t necessarily helpful.

Lets go through the main aspects…

A perfect trine would be one planet situated 120º from another, however, each astrologer will give leeway and ascribe an ‘orb’ in working with aspects (up to 7º or even 12º.

The more personal planets (Sun, Moon, Mercury, Mars & Venus) might well harness this wide trine, even considering any planet in the same element to be ‘trine’.

Meanwhile, you might not worry so much about the outer planets (Neptune, Pluto, Uranus), or you would use a tighter orb, say 0º to 5º.

Trines produce a sense of flow, particularly where the planets appear in the same element – a fiery Aries Sun trine Sagittarius Moon, for example.

However, with great ease comes great potential so that two planets working in harmony could be an outcome of ‘spreading like wildfire’ – or an ‘easy life’ that doesn’t equip the individual for life’s inevitable hardships and challenges…

While there’s natural affinity and an easy energy to work with, it could be a case of overflow!

Saying that, it’s always nice to see two planets harmoniously trine, working together like two lucky team-mates that are on the same page!

Just like two cars at a junction, the 90º aspect in a square produces tension.

A ‘hard’ angle, a square produces conflict to work with.

It’s an aspect of action, particularly as we consider that any two planets that are square must once have been together, and that this pattern of 90º (or thereabouts) has a quality of resistance, as it strikes out with momentum – like the pattern made between Cancer vs. Aries, or any sign ‘at odds’ with another.

In addition to the visual of two cars up against each other at a intersection, you might remember the square through imagining a boxing ring, which is not a ring but a square.

In your minds eye imagine two boxers fighting from their corner!

Wonderful things can arise from the tension of a square, as we’re forced into action.

While there’s relief in a square (with one winner in the ring), oppositions in the natal chart are in a more constant tension, with a push pull quality.

Imagine two sides of a piece of elastic, tethered to two planets! And the way they are constantly aware of one another, with no relief.

This is a 180° angle, again a tight or generous orb can be used, depending on the two planets in question.

Consider the quality of the polarity of the signs, these two opposite sides of the axis: polar opposites.

These two opposing planets are as far apart in the chart as can be and yet there’s plenty of commonality to be found between those that seem so different. Though they will be of a different element, there will be a shared motivation and modality – an MO, modus operandi, or mode.

Remember that opposites attract, so just as with the challenging notion of the square that can produce the result of action, opposition can lead to awareness and acceptance, a kind of harmony and balance between energies to work towards (not to say it’s easy!)

Like the trine, the sextile is an ‘easy’, free-flowing aspect.

While this 60º pattern in the stars signals a favourable, friendly dynamic, just like the trine there’s potential for rapport that arrives too quickly.

This is the aspect formed between the element fire and air, and earth and water.

You can imagine that it’s easy to start a fire with a little of the right breeze, and how useful a drop of water is to the soil… But equally how quick a flicker turns to a flame in the wrong way (a heated discussion, gossip!) or how mud can form when we really need dry, solid ground…

While we have compatibility, it’s sometimes nice to have a bit of variation!

Finally, the conjunction of two (or more) planets or points in the chart is where we see a pairing or gathering in the chart and horoscope.

This can be rare and a special moment (like the Great Conjunction of Saturn and Jupiter in 2020), or a relatively regular occurrence, as with the Sun and Mercury.

The tightest aspect in this case would be 0º, or up to about 7-8º, depending on how generous you are!

We must consider aspects in astrology, as the melding of two or more planets brings about a new dimension to view matters.

So, rather than seeing an ‘Aries Sun’, we might be dealing with a person that’s an Aries with Saturn conjunct their Sun, which will add an altogether different tone.

Birth charts are like a cake – there are many ways to bake and stir, so many variations with the same ingredients… Consider the blending of planets as if they were your flour, eggs and oil, and how things are hotting up!

Get to know the planets in astrology, here.