Born on the 26th January 1958 under the friendly and original sign of Aquarius, this abundantly positive chat-show host is a radiant light.

Sagittarius Rising with a harmonious alignment to a feisty Moon in Aries, Ellen is fun, adventurous and intrepid, brave and daring.

Unafraid of making it her own way, when her career hit a wall she simply put pen to paper and wrote out a role for herself.

Sagittarius speaks out and is moral, philosophical and truthful. Mars and Saturn in this sign give Ellen discipline, as they sit in the first house of the horoscope – the house of ‘self’.

The planets in fire are also aligned in a trine to rebellious Uranus, creating even more shock factor that works in Ellen’s favour!

Venus sits with the Sun in Aquarius, giving her an attractiveness that’s unconventional. With Venus in Aquarius she’ll love and value partner that’s also a friend and adopt quirky touches in her dress.

And Aquarius is the sign that best suits androgyny.

The Virgo Midheaven, sitting at the top of the chart gives off a neat, analytical air in her public appearance.

Notice Jupiter sitting with Neptune in the probing sign of Scorpio?

I wonder if this is linked to her huge career on screen, but also the sexual abuse that’s been revealed… Ellen had a horrible stepfather and had to flee, spending the night in a hospital to escape him (very 12th house…) 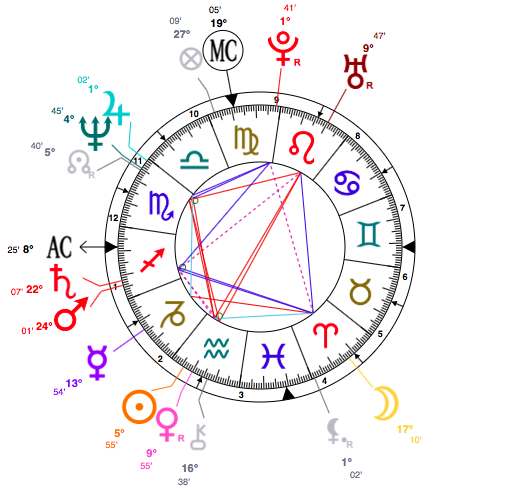