Let's Take A Look At His Birth Chart And Iconic Style!

Capricorn David Bowie is iconic both in music and fashion style.

Let’s take a look at his Star Sign Style and astrological placements:

With Venus conjunct the Midheaven, sextile his ascendant, it’s no surprise Bowie was interested in music from an early age.

He studied art, music and design (totally Venusian areas to head in) before a professional career beginning in 1963. This timing syncs with Pluto in Virgo trine his Mercury.

“Space Oddity” was released in 1969, with Uranus in Libra sextile his Venus and trine his Aquarius Ascendant, and Mars in Sagittarius on his Venus.

In 1972 he embraced glam rock with a flamboyant and androgynous alter ego Ziggy Stardust, with Neptune in Sagittarius transiting his Venus.

In 1975, Bowie gained success in the US, with “Fame” and the album Young Americans.

Neptune (and the North Node) transit his 10th house and conjunct his South Node at the time of release is very interesting.

With the release the 1972 album The Rise and Fall of Ziggy Stardust and the Spiders from Mars, Bowie achieved stardom. He presented aspirations to become famous in “Star”.

Then “Fame” meant stardom but also some other professional repercussions, which led to a fallout with his manager Tony Defries.

In ’77, he changed direction with “Heroes”, then in the 80s he had number-one hits with “Ashes to Ashes”, and “Under Pressure”, the 1981 collaboration with Queen.

Ashes to Ashes, Saturn (Grandfather Time) had recently harmonised with his Capricorn Sun, Uranus on his Jupiter in phoenix-like Scorpio.

Massive commercial success followed in the 1980s with Let’s Dance, which was released with Neptune at 29º Sagittarius (movement) sextile Pluto 28º Libra (partnership).

Bowie left us on the 10th January 2016 just two days after his 69th birthday and the release of his final album, Blackstar ★. 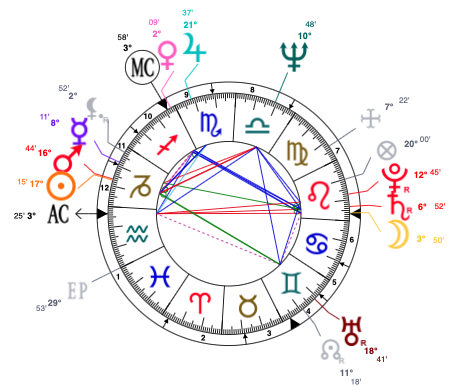