For your yearly style scope and fashion horoscope I look at the larger planetary cycles in motion.

You can read more regular monthly and yearly horoscopes, here…

At the very end of 2017, structured Saturn made his way from exuberant, knowledge-seeking Sagittarius, begining a three-year stint in the zodiac sign Capricorn.

Those born early in the sign (December 22nd to around the 27th) will have felt it most (late 201&), as will individuals born in the early part of Aries season, Cancer season and Libra season – the Cardinal signs in astrology.

The last time Saturn moved through Capricorn was 1988 to 1991, a time when the structure the Berlin Wall collapsed (along with the East German Government), apartheid began to be dismantled in Southern Africa, and pro-democracy was championed in Tiananmen Square.

We could think of this stage of evolution as an opportunity to correct things that are outside of their proper place, a Karmic rod coming to whip things back into shape, as Saturn likes following the rules. 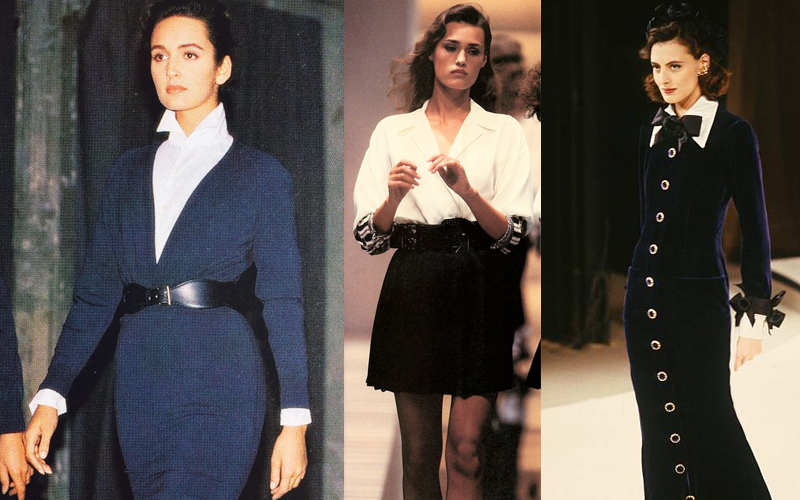 Without discounting the variety of styles that were trending during the very late 80s and early 90s, I like to hone in on the more austere, principled and ‘straight’ styles, that chime so well with the Capricorn archetype.

Capricorn is the zodiac’s earth sign of dark winter, respected as a capable authority, always ‘appropriately turned out’ and classic.

It’s a sign known for doing things correctly – from laying the supper table to building an empire, brick by brick. They uphold practical standards for us all, with their ambitious, driven nature (see Capricorn’s Michelle Obama and Kate Middleton for proof).

While I don’t think styles will become more prudish or ‘buttoned up’ during Saturn in Capricorn, I do think we’re in for a quality check. This is a zodiac sign that appreciates craftsmanship, and ‘fast fashion’ could well have had its day in the sun.

Planet of restriction, boundaries and of limitations, Saturn makes clear what can and can’t survive (just ask anyone who’s enduring their Saturn Return).

Capricorn is the sign of the bleak mid-winter, a time of hardship and hunkering down.

It could be a sobering stretch ahead, as we become more mindful of purchases, and the stark reality of wealth and financial truths, which could be disrupted with Uranus in Taurus chiming in (see below).

Pluto is presently in Capricorn too, and I’ll be surprised if we don’t see lots of people adopting a tougher look, as people own and assert their sense of power and ambition.

Style wise, we can marry the stoic authenticity of Capricorn, who loves craftsmanship, ‘doing things properly’, abiding by the rules, and structure, teaming these principles with cornerstones of the underworld: visible sexualised materials – patent finished, leather and hardware.

After all, clothes and style are a significant way to express on the outside what we’re feeling on the inside…

You can read about this planetary cycle in a separate post, here; it’s very much connected to our material values – our bank balance, income and wallets, and perhaps even our wardrobes…

Taurus is the zodiac sign governing economies, financial systems and our collected approach to savings (and agriculture). It’s not hard to anticipate the changes Uranus will bring, as we’re already sensing the shake up in this corner of consciousness…

The Times Are Changing…

I’m no expert on BitCoin, however I do know that digitized payment methods are mainstream (I use PayPal for example), and that there are all kinds of new ‘wallets’ embedded in phones and devices that are revolutionizing how we handle our earnings.

It might be time to buy a different kind of purse – an iWatch or chic phone case that helps you do more!

With this shift, it might be that coveted accessories and collectors items – like very expensive handbags – are not such prized possessions after all…

Full Moon on Halloween 2020! Get Spooky & Read Your Halloween…