Amber Heard’s zodiac sign is Taurus, as the star was born when the sun had moved on from the first sign of Spring and into the Bull’s pastures – just 2º Taurus. 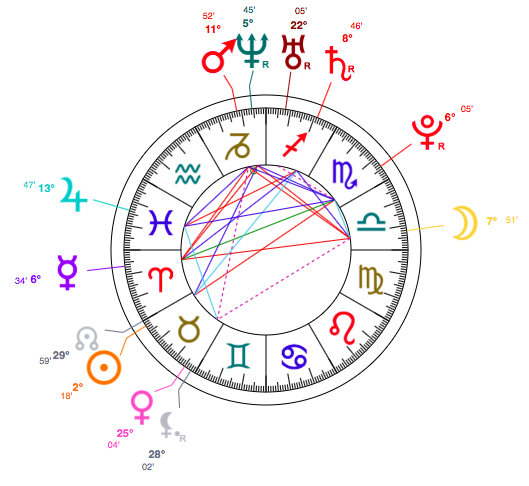 Amber Heard oozes sensual Venusian beauty – the Taurus star boasts bags of Bull with the sun, Venus and Lilith all in Taurus. Planets in sensual Taurus – including Venus in Taurus – give her those gorgeous rosebud lips and that steady gaze!

Her Sun is closely aligned together with the karmic point of destiny – the north node – in her horoscope, however this is at 29º Aries (so it’s an out of sign conjunction).

Moon in Libra is another placement that offers beauty; Libra is the zodiac sign that governs fashion and a gracious style. However, this Hollywood actress doesn’t exactly herself with poise…

Power Stuggles are seen in the horoscope thanks to the 2º Sun opposite a 6º Pluto, which is widely conjunct the south node. As we’ve seen with the court case with Johnny Depp there’s plenty of struggles in partnership, where Amber is pitted against a powerful contender.

A fiery Mercury in Aries adds a dash of spice and direct approach to thinking and speech, while Moon opposite Mercury sees those heady notions of expression come to blows with emotions – and is also indicative of someone prone to fibbing!

Moon, Mercury and Mars create an interesting aspect known as a T-square with dreamy Neptune involved, too; these planets are all Cardinal – motivated, assertive in their own way. Mars and Neptune in Capricorn promote an ambitious streak!

Amber may have been keen to climb the ladder of success in the artistic field of acting, yet her direct approach might sometimes prove tricky to manage, particularly in meeting her need for congenial working relationships…

Mars Retrograde is perhaps responsible for her opportunity to purge and come clean – lets hope by January 2021 she has made amends for the secrets now coming out about her volatile demeanour!

Uranus in Taurus has no doubt been the astrological influence shaking up her image and persona… Shocking.

Taurus Yearly Horoscope… Your Annual Forecast Is In!