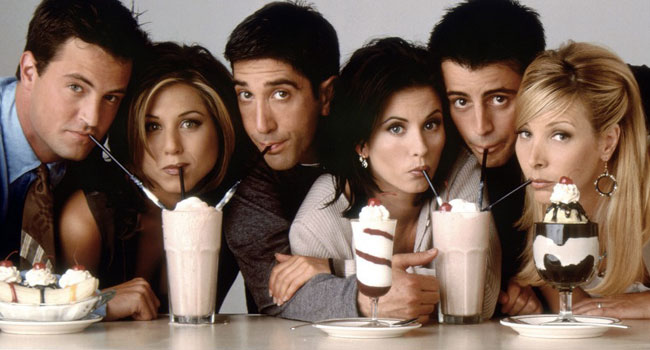 Check out the Star Sign Style of our pals in the Friends Astrology Analysis!

Looking at six charts together is fascinating, spotting where there are overlaps in planetary combinations between the pairing of people and their natal planetary positions.

Even more so when the birth charts are those of people we feel we know so well!

I spent a good deal of the 90s watching Friday night episodes of Friends, relishing in a new episode or simply watching re-runs on VHS. These were the days before our minds had become so fast paced that we became bored after seeing a show once – I could’ve watched episodes time and again! I don’t think I could say that about any TV show today.

We all loved this popular sitcom, and it set the tone for a generation of house sharers, singletons and friends with benefits, teaching a new generation how to live, love and be great friends.

So, what about the stars of the hit show? What does a look at their birth chart reveal? Dive into my star sign speculation, with a look at the show itself – natal chart analysis below… 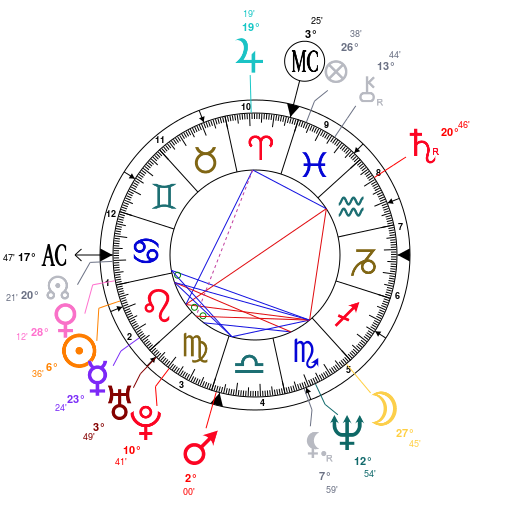 A natural thespian, Lisa has Leo strong in her chart.

It rules her Sun and Mercury, which is how she thinks and communicates. Acting is a natural choice of vocation with this pairing of planets.

Kudrow isn’t all roar though, she’s actually more intuitive, feeling and empathetic with her Moon in Scorpio and Cancer on the ascendant.

Incredibly sensitive, Cancer rising people are a little more hesitant than their Leo sisters, with their mind on security and safety as oppose being in the limelight, which ticks the lion’s box.

This crabby constellation makes a trine to the moon in Scorpio, so Lisa’s feelings rule, driving her with a deeper creative prowess.

Venus rising in Cancer is a beautiful aspect to have too!

Jupiter on the Midheaven in Aries trines Mercury, meaning any message she has travels far and wide! So many superstars have this planetary placement and for Lisa, an independent venture works well. 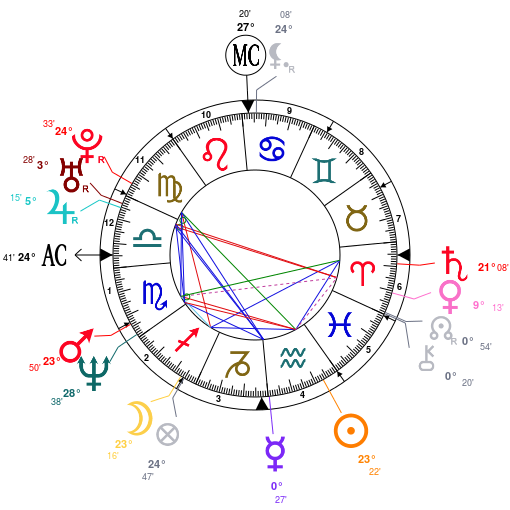 Libra rising gives Anniston a truly beautiful air, but sits opposite ruler Venus in the chart posing a challenging dynamic for Anniston.

With the sign of the Scales ruling her chart it’s a natural want for Jennifer to seek out partnership and harmony in relationship’s, and yet she has warrior sign Aries managing her female inclination’s.

The Moon in fiery Sagittarius doesn’t help the cause much, as this is the spirited adventurer stirring her soul, perhaps making her a little restless and more likely to feel at home roaming than settling down. 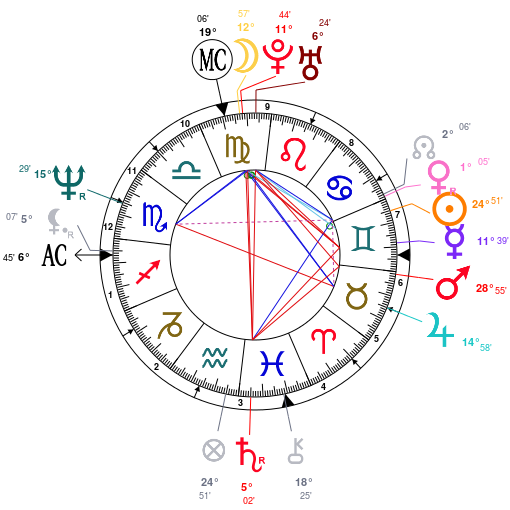 I love that Courtney’s Moon is conjunct the Mc in Virgo, true to life, her main role to date as ‘clean freak’ character, Monica Geller, is a reputation that precedes her!

She has Pluto conjunct to so this is (intensified). Cox has lots of planets in the flexible mode – her chart is mainly ‘mutable’, with Sagittarius rising, Virgo Moon and Sun and Mercury in Gemini.

Mutable is a style of operating that is particularly accommodating. Like Lisa, Courtney has Venus in the Cancer constellation. And even in subsequent film roles Gemini/reporter…

Despite all three women’s Venus sign sitting in the Cardinal constellations, none of the planets are squaring each other – this might have signalled a clash and competition on set! 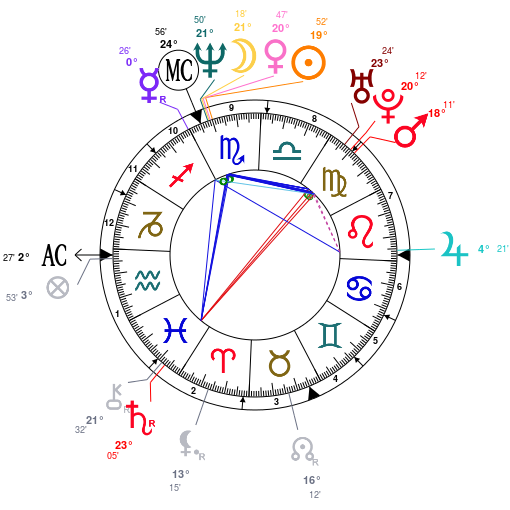 David has Moon in Scorpio like Lisa Kudrow and Matthew Perry. 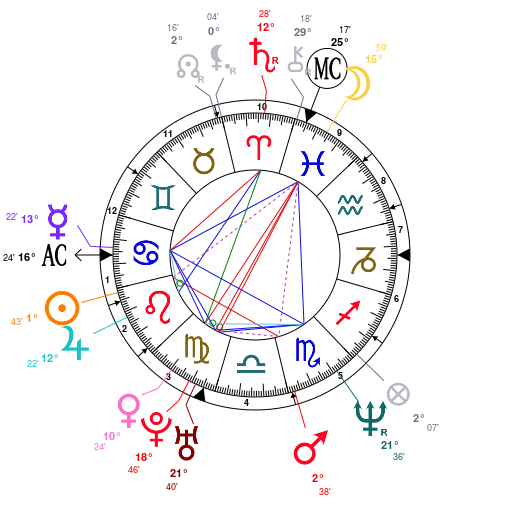 Sun and Jupiter in Leo mean that like Lisa, Matt has a natural showmanship and ability to perform.

Again, like Lisa Matt is Cancer rising, and his chart ruler, the Moon, is in Pisces, pointing to a compassionate and sensitive nature. Maybe there’s more to that catchphrase than we thought…

We look to a man’s Mars sign to see his masculinity, and Matt has his in the early degrees of sexy Scorpio!

Well, he is a hottie right? Fifth house Mars could point to a creativity through his Scorp side too. 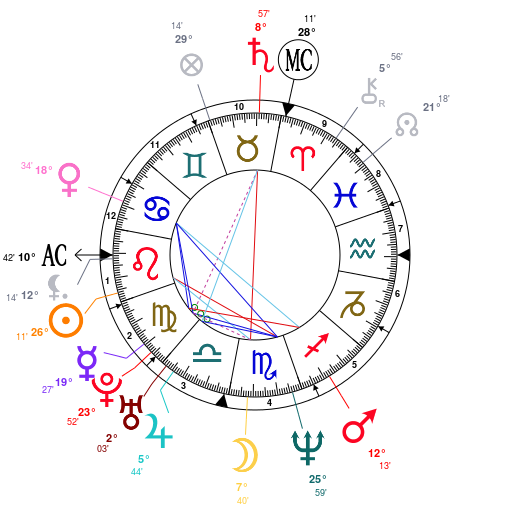 However this lion has Mercury transiting the constellation Virgo, who’s tone is somewhat more critical and analytical than the lion.

Paired with Matt’s Mars in Sagittarius, this spells a cutting wit (Virgo) combined with quite a clown (Sagittarius)! Leo ascendant allows him to step out into the world in dramatic fashion.

Like Lisa and Courtney, Matthew has Venus in Cancer.

And his drug problem? Could be that Sun under constant scrutiny in the first squaring up to planet of disillusion (and drugs), Neptune in Scorpio!

A common theme across all of the charts is the conjunction of two ‘outer planets’, that is planets for a generation, Uranus and Pluto, dancing together in the constellation of Virgo.

We know that all of the people born during these few years will share this common theme, but how does it play out in our ‘Friends’ charts?

Courtney – the Moon is with them – home, neatness, tidying and cleanliness – Virgo traits that she expresses through her reputation (Mc) as Monica, at home (Moon) in her career.

Remember the ‘mocklate’ episode? It shows her health-conscious side… The most interesting by far!

David – Mars is conjunct this pairing of planets in the eighth house, and I would say that David seems to be very Virgoan in aspects of his life. Meticulous, exact, critical (as Ross), precise, the scientist, there to serve… As Aquarius rising Saturn (in Pisces) and Uranus (in Virgo) are his chart rulers, making this opposition key to his life’s themes…

I don’t know much about his love life but perhaps there’s some link between this pairing of planets and Matt’s Venus, which is also in Virgo. I know that he bought the dog ornament (Venus rules our purchases) and loved the little chick and duck!

A Word On Saturn Returns…

Many of you will be familiar with your Saturn return and if not, take a look here.

For those in the know, I bet you’re curious to know more about the Friends stars school of hard knocks?

Cox and Schwimmer both have serious Saturn in Pisces.

Aniston and LeBlanc are Aries generation, and I feel that Matt’s says something about his independence in career and Jen? Independence in love (hers is with Venus, his in the 10th house).

Baby of the bunch Perry has Saturn in Taurus, like Matt in the 10th. Could be linked to indulging.

Keep following Star Sign Style! for more astrology analysis of the most Glamorous Groups around!