The Astrology Of The Bikini…

A closer look at the horoscope of the launch of the two-piece. 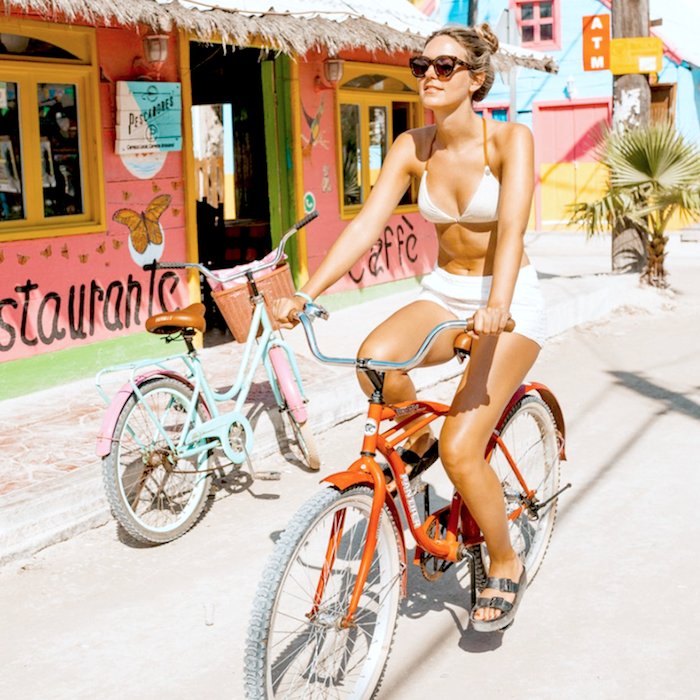 Sweet Liberation! A Two Piece That Gives Us Freedom To Sunbathe…

The bikini was one of the inventions born under the realm of Neptune in Libra, as French engineer Louis Réard introduced this incarnation of swimwear in the 40’s.

Named after the Bikini Atoll (islands where the atomic bomb was being tested), its introduction was partly due to material rationing after World War II.

Horoscope Of The Bikini Launch 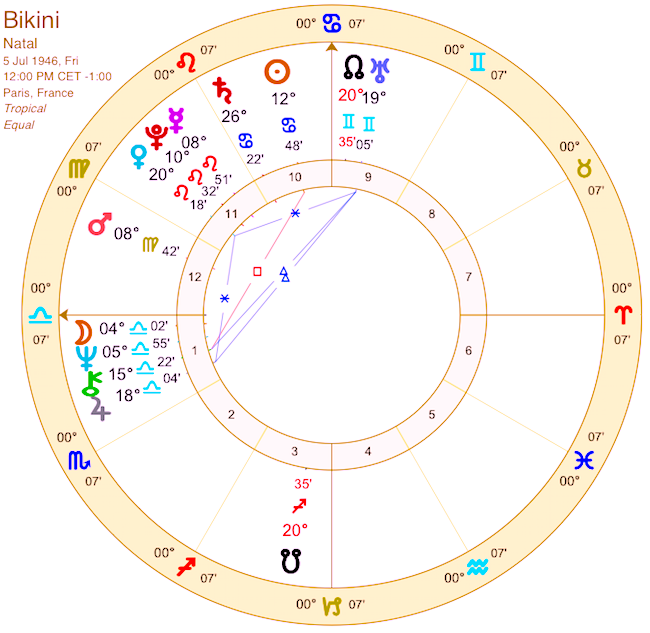 As you can see from the horoscope above, the bikini was launched under a Cancer sun, Libra moon (conjunct dreamy Neptune, god of the seas), with Venus in showy Leo.

Innovative Uranus was conjoined the north node of fate in Gemini, ushering in new inventions with a sense of duality – perfect for a two-piece.

Uranus is almost perfectly aligned with giant Jupiter, heading up a stellium in fashion-conscious Libra. This series of planets consists of Jupiter, Chiron, Neptune and the moon, quite the beautiful blend!

I love that the sun in water sign Cancer is the zodiac sign most suited to the sea, the beach and summertime.

Cancer rules the breasts and stomach, so makes a wonderful sun sign for this item.

Venus In Leo – A Beautiful Tan…

One of the biggest benefits of a bikini is the amount of flesh we can expose under the suns rays, avoiding tan lines and absorbing the maximum amount of Vitamin D.

With Venus in Leo during it’s launch, the bikini is the poster-child for golden brown beauty. Venus also perfectly aspects the nodal axis, suggesting that this fashion statement was destined!

The moon brings us a sense of ease and comfort, and for the launch of the bikini it’s interesting that the moon was passing through the aesthetically sensitive Libra moon.

Libra knows what looks good, so this fashion trend has a blessing from the stars!

The moon with Neptune speaks of almost endless possibilities, and of the artistic potential for the sentiment of this invention.

Neptune is the god of the seas, and a highly artistic, expressive planet.

The moon is the body in astrology that is tied to trends, and collective groups of people; the masses.

Mercury / Pluto In Leo – Named After A Bomb!

Mercury is the naming planet, and Pluto is a powerfully volcanic force; these two conjoined in Leo reflects the moniker ‘Bikini’ alludes of something much more dramatic! A connection to the atomic bomb is pretty powerful… And, it also suggests that what this fashion item conveys is smoking hot.

Mercury is the messenger, and Pluto is the planet of potent allure…

Mars is the only planet in the chart that is not aspected by another planet, putting the energy of aggression and combative forces outside the parameters of the bikini. [We could consider Saturn in a wide square to Jupiter.]

Could this speak of a lusty male gaze that feels ostracised by this glamorous vision? Or perhaps it’s a nod to the wartime era, now jubilantly left behind in favour of peace. The sign Virgo certainly could be thought to oversee fabrics, as the sign of harvest-fields and maybe cotton production.

Keen to hear your input too, Stargazers.