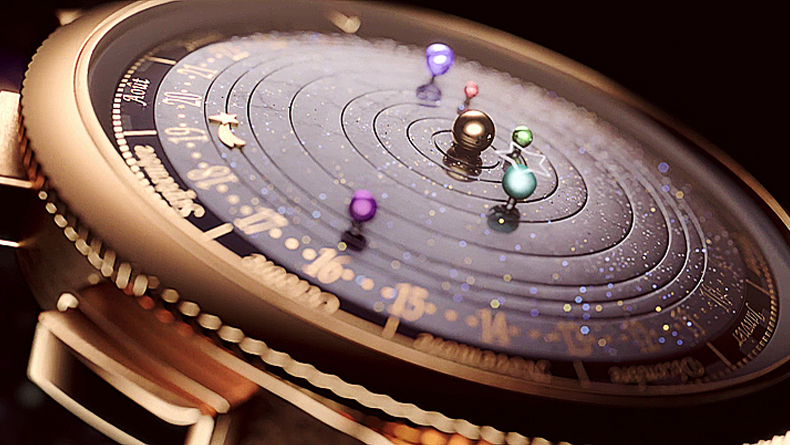 The timepiece celebrates celestial orbits by drawing inspiration from the historic tradition of planetariums, much in vogue in the 18th century.

In keeping with one of the Maison’s cherished sources of inspiration, planets and constellations appear in enchanting guise to evoke voyages and dreams.

The pink gold shooting star at the outer edge of the dial tells the time, completing its circuit in 24 hours.

You can also choose a lucky day by positioning a red triangle on the calendar. On that date, the Earth will move to a position directly below the star engraved on the sapphire crystal, as a sign of good luck.

The Poetic Complication timepiece provides a miniature representation of the movement of six planets around the sun and their position at any given time : Earth and Mercury, Venus, Mars, Jupiter and Saturn – all visible from Earth with the naked eye.

The sun and shooting star are fashioned in pink gold, the Earth is turquoise, serpentine for Mercury, chloromelanite for Venus, red jasper for Mars, blue agate for Jupiter and sugilite for Saturn.

The movement of each planet is true to its astrological length of orbit – although doesn’t include retrograde periods!

Has to be the BEST astrology watch out there! Or have you seen one that’s even more impressive?

Email kimberly@starsignstyle.com with your stellar suggestions…