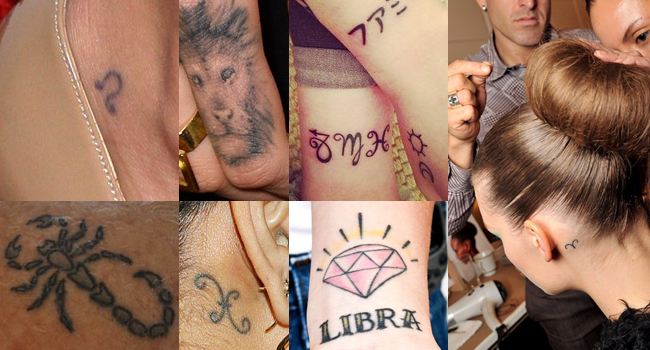 Which celebrities have an astrology tattoo?

See the stars who honour their horoscope with a zodiac inspired design! The most stylish and beautiful tattoo’s below…

The Finnish model Suvi Koponen sports an Aries glyph behind her right ear.

Saturday’s singer Rochelle has a tattoo on the inside of her left wrist with two glyphs of the zodiac, which translates to ‘Aries Love Pisces’, representing her star sign, Aries, and her husband Marvin Humes, born on March 18th under the sign of Pisces, the Fish. 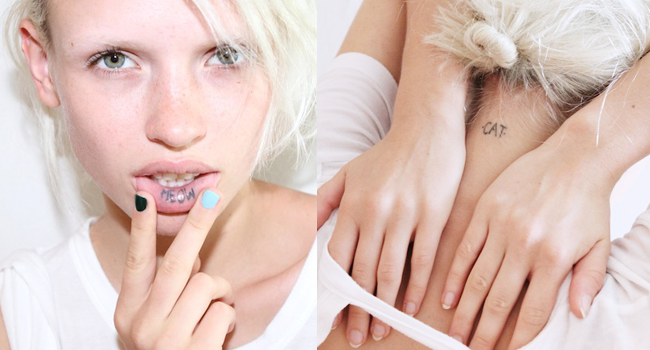 This luscious Leo has both Sun and Moon in the constellation of cats – Leo the Lion! 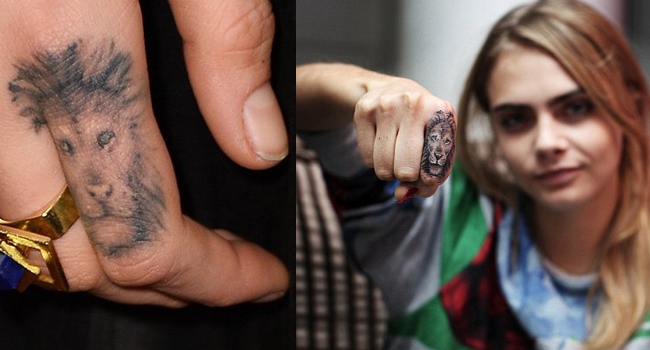 Luscious Leo model Cara has a little lion inked on her forefinger. Her first tattoo, she immediately unveiled it via Instagram but it was artist Keith (Bang Bang) McCurdy who steered the star to the final design.

He revealed the whole story to Jay-Z’s website Life + Times:

“Cara wanted to write the word “Lion” down her finger. And I told her, I was like, “I don’t think that’s very sexy. Why don’t we do a picture of a lion like a piece of jewelry, like to decorate you?” Tattooing is so much of a fashion and people don’t really notice, but you got to do something timeless, because you don’t want to do something that’s a trend, like a lower back tribal tattoo that was cool in the ’90s and now people are covering them up all the time. So you really want to do something timeless and unique. Especially on somebody like Cara. So I gave her the idea, and she loved it, and we kicked that thing’s ass.” 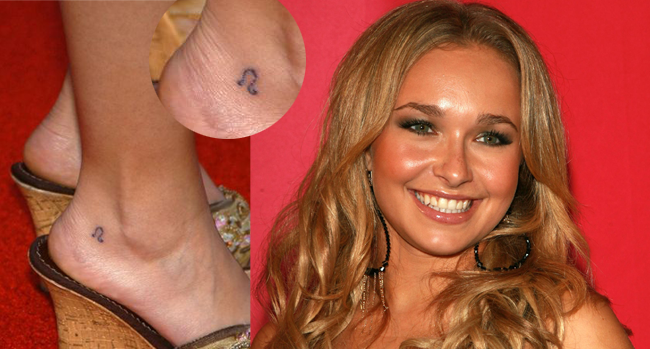 With the glyph of Leo positioned behind her right ankle, Hayden pays homage to her StarSignStyle! This tattoo was Hayden’s first and Panettiere has admitted that her mother was reduced to tears when she got it without her permission:

“My mom didn’t see it for ages, then, I was being body-scanned for a special effect on Heroes. And she saw it, tried to rub it off and suddenly her eyes welled up.” 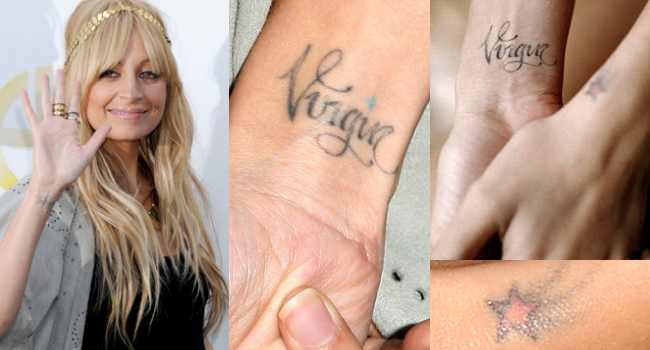 Keeping it demure, virtuous Virgo the Maiden is represented by its namesake as Nicole Richie has Virgin tattooed on the inside of her right wrist. Still, some tattoo’s will be regrettable for some:

“I’m a Virgo and the sign is a virgin. So when I was 16, I got the word virgin tattooed on my wrist, thinking I was sooo deep and cool. And now I just look really weird having virgin written across my wrist and I have to explain it.” 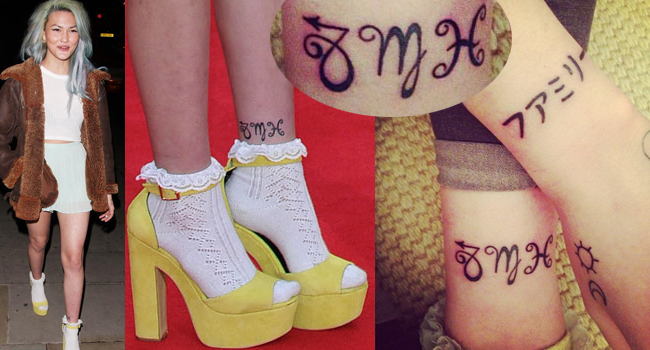 Born on the 15th September 1995, Asami has Sun and Venus in Virgo, Neptune and Uranus in Capricorn and Saturn in Pisces – three zodiac constellations she’s decided to mark inside her left ankle. The singer has Moon in Gemini and I’m curious to know her rising sign… 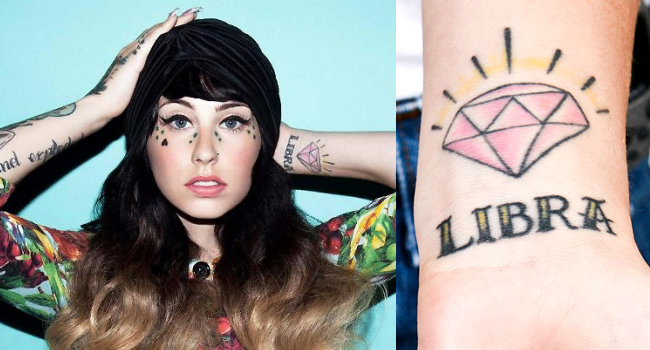 Rapper Kreayshawn has a pink diamond accompanying the word LIBRA on her left wrist. The artist says of her body ink:

“For me tattoos have kind of formed themselves into like mini therapy sessions. Like, you know, you’re having a hard time at a point in your life and you’re like ‘I’m just gonna get a tattoo. It’s almost like every year of my life has this moment where I get this tattoo. I look at them and can remember how I was feeling at the time.” 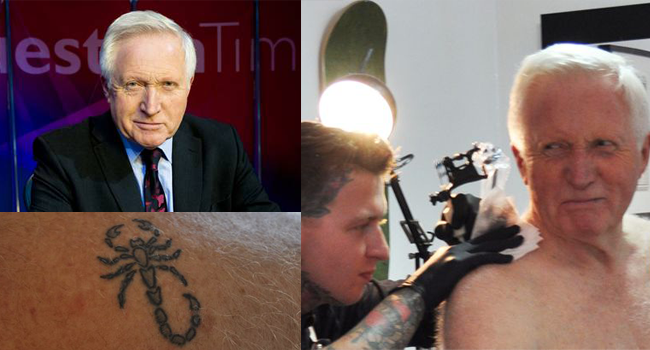 This Question Time broadcaster had his first tattoo done at the ripe age of 75, during the making of a maritime show for the BBC. He said:

“You are only old once. I have always wanted a tattoo. I thought I might as well have it done now. It’s a dream come true.”

Love that. You’re never too old to live the dream David! 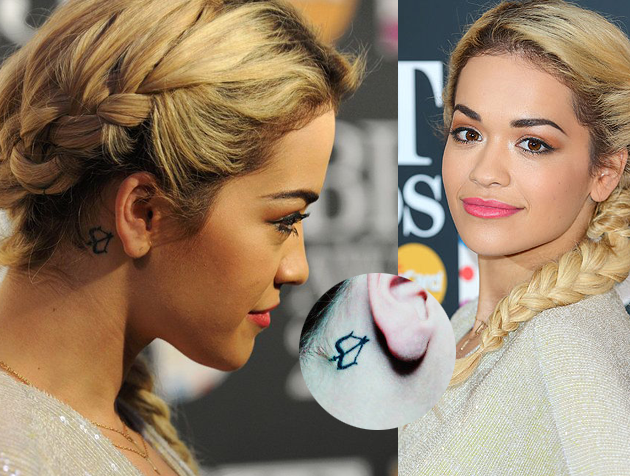 Singer and stellar Sagittarius star Rita Sahatçiu Ora has the sign of Sagg behind her right ear – it’s the archer! She has the letter ‘R’ behind her left lobe… Only thing is, the bow and arrow are facing downwards, which goes against the typical upwards direction that Saggy usually shoots for. 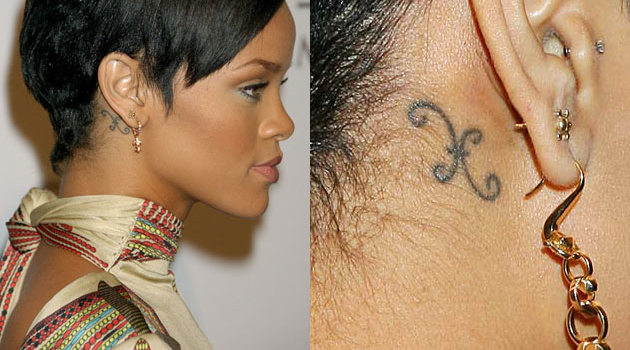 One of Rihanna’s first tattoos was the glyph of Pisces, tattooed behind her right ear. It was done in Tokyo by a famous Brazilian artist along with the music notes on her foot, in 2006.