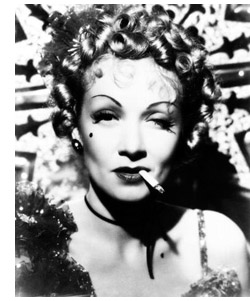 Born Marie Magdalene Dietrich on the 27th December 1901 in Berlin, Marlene was the highest-paid actress of the 30s and in 1999, was voted the 9th greatest female star of all time by the American Film Institute.

She found fame as cabaret star Lola-Lola in The Blue Angel, which featured her singing Falling in Love Again. Dietrich remarked that she was at her most beautiful in The Devil Is a Woman.

Hugely iconic, Dietrich is known for her impossibly arched eyebrows and fondness for dressing in men’s clothing; her androgynous style was mixed with high glamour, in particular fur stoles and silk dresses. The most fashion forward women of the thirties embraced the cross-dressing trend, boasting that they were using their husbands tailors. Still highly influential, many of today’s designers reference this legend in their collections.

Looking at her birth chart reveals Dietrich had her Sun, Mars, Mercury, Jupiter and Saturn in Capricorn. This is of course the sign that best suits black and has serious style with clout, carrying classic tailoring in tweeds or wool beautifully. With her Moon in charismatic Leo Marlene thrived on creating a dramatic impact and was well suited to the spotlight; Venus in eccentric Aquarius will explain many other characteristics of the star.

Of her Cecil Beaton said…

“She remains what she has been for many years – an absolutely strange delight, whose gift lies outside her achievement as an actress, is not tied to a specific time and does not depend on the taste of the moment, not even on common sense.”