Looking Ahead To 2023, Mark These Dates In Your Calendar! 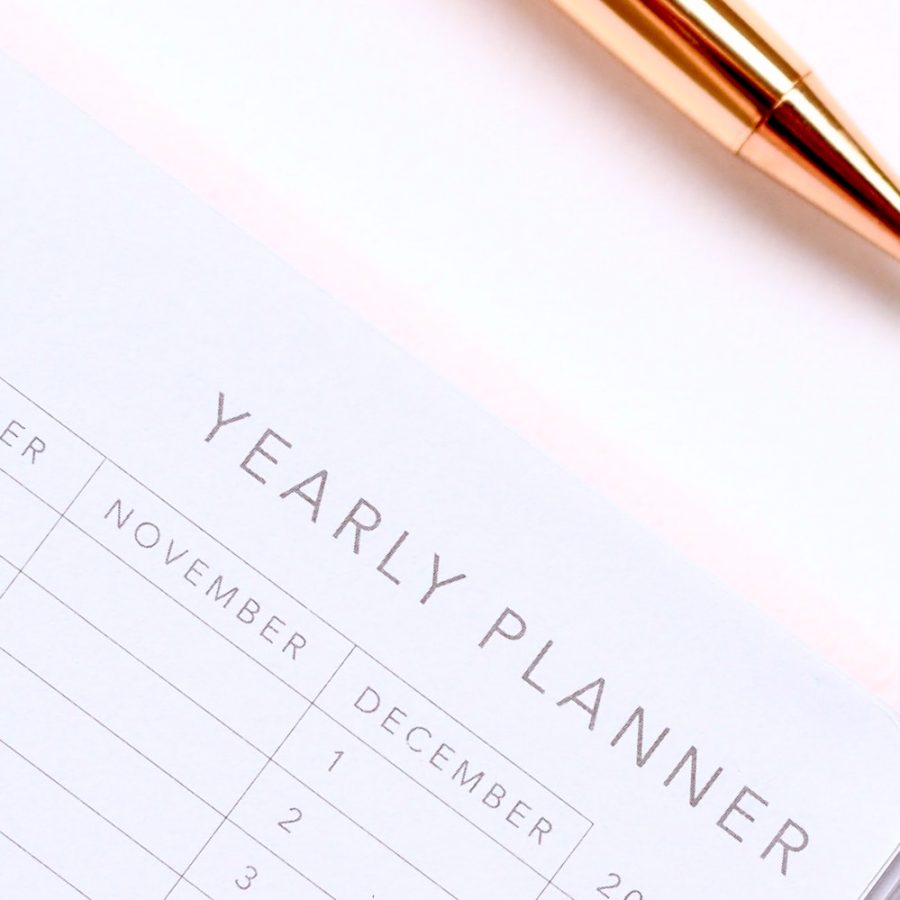 As we enter a New Year, it’s ideal to know the most important moments and key points in the twelve months ahead.

Here are some special dates in 2023 to look out for…

These are just some dates I’ve personally selected as interesting! There are likely many more and I’m just pointing these out as I’ve walked through the year. See more on the Eclipses of 2023, here. 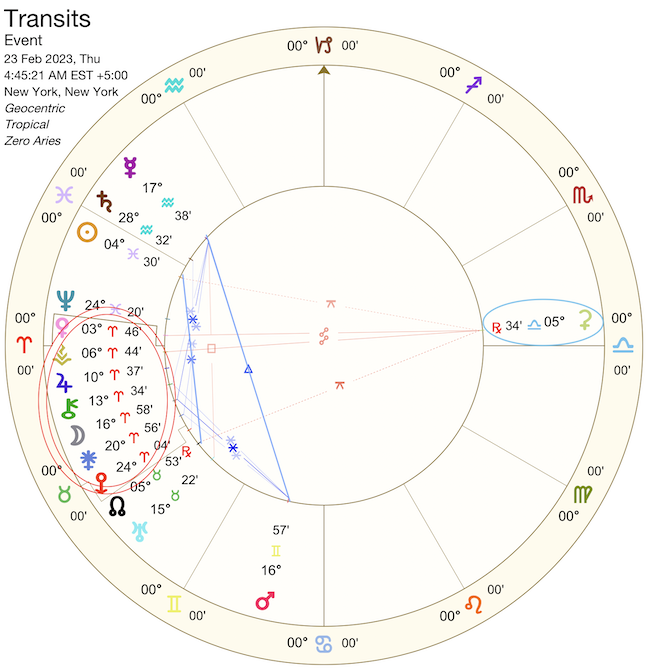 The first day I’d like to point out is February 23rd, when there’s a huge stellium in Aries. Venus, Vesta, Jupiter, Chiron, the Moon, Juno and Eris are all assembled in this sign. All oppose Ceres in Libra, more specifically Venus and Vesta. Not seen is Pallas in Cancer, which is square Jupiter, I just thought this looked neater!

We’ve harmony (and a trine) between Mercury in Aquarius and Mars direct in Gemini (after a long spell retrograde). The Sun is aligned with the North Node in Taurus. 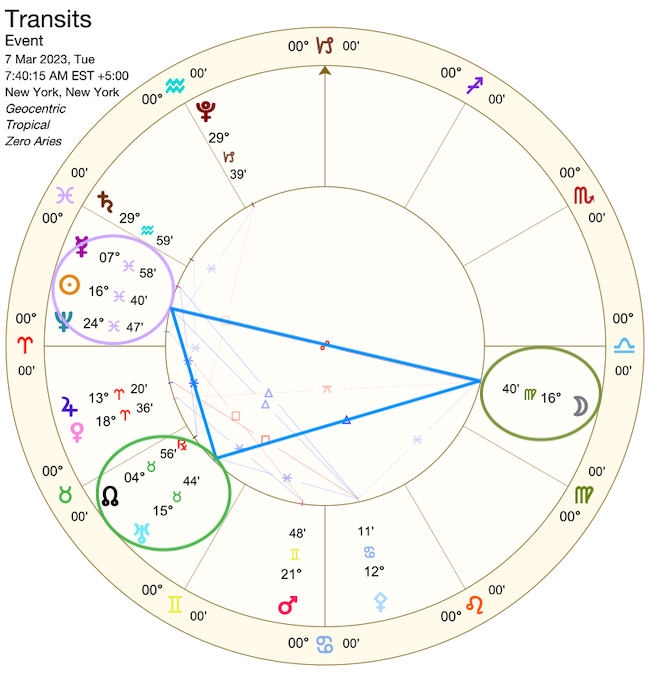 I’ve not included every Full Moon in this list. This one is particularly interesting to me, as the Sun (and Moon) have recently made a trine aspect to Uranus. The ruler of the Full Moon [Mercury in Pisces] also recently aligned with the Taurus North Node. Note too that Saturn and Pluto are at 29ª, a ‘hot spot’ degree as the Annular Total Eclipse (see below, April 20th) is at 29º… 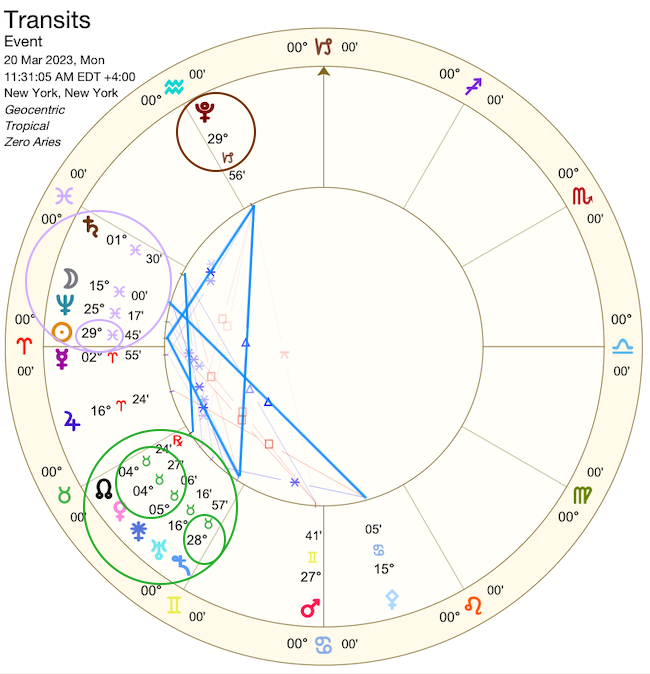 Just see this as a really nice day – ahead of a New Moon and ahead of Spring Equinox!

The Sun finds harmony with Pluto and Sedna, Venus is conjunct the North Node in Taurus (+ Juno), Pallas is agreeable. All is well save for Mars in Gemini, suggesting it’s a time to wind things down, rest and go easy… 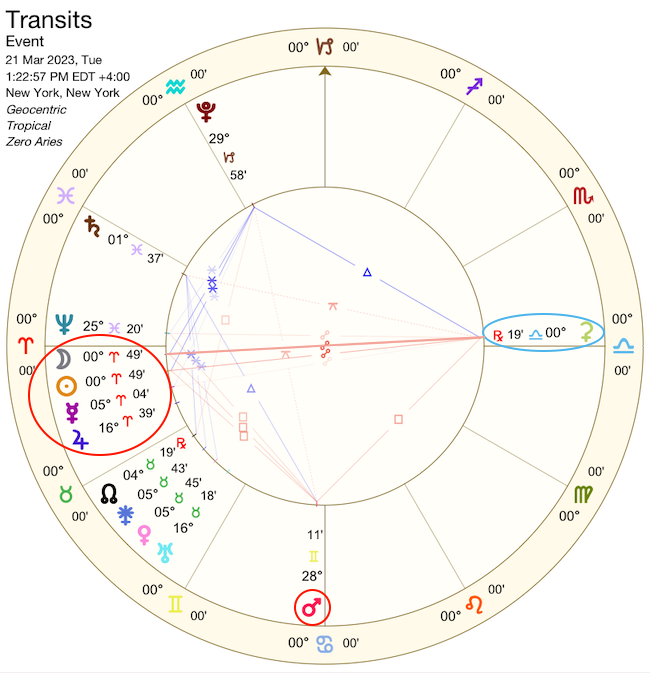 Very quickly after this pleasant lull, we’re whisked into Aries Season and swiftly see a New Moon in Aries (opposite Ceres).

Technically, the ruler of this lunation [Mars in Gemini] is square to the New Moon, however, I don’t think it will be really testing, as it’s in Gemini, a more compatible place. Venus and Juno are together, with the North Node, and Ceres moves into Virgo the next day. I wonder if this leads us to meditate on the themes that have come up with Ceres in Libra prominent thus far in 2023…? 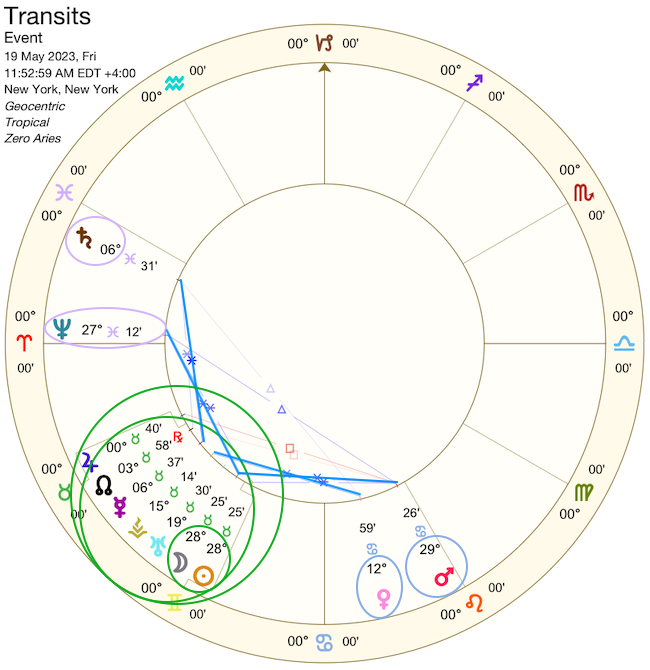 Here’s an important, key date for 2023. We have an Aries New Moon and Total Eclipse (on my birthday no less!) with a square from Pluto, newly arrived in Aquarius. Note Jupiter and Eris in Aries, too. It’s a spicy one!

Elsewhere, Saturn is aligned with the Node Node (4º), Mars is aligned with Mercury (13º), all these in water and earth, and finally pallas is aligned with both Neptune and Ceres (24-26º). This will be the second New Moon in Aries and one to write home about! Thankfully Sun and Moon quickly move into Taurus, so this heightened mood comes onto solid ground (though Pluto in Aquarius continues to square the Sun in a more direct fashion…) 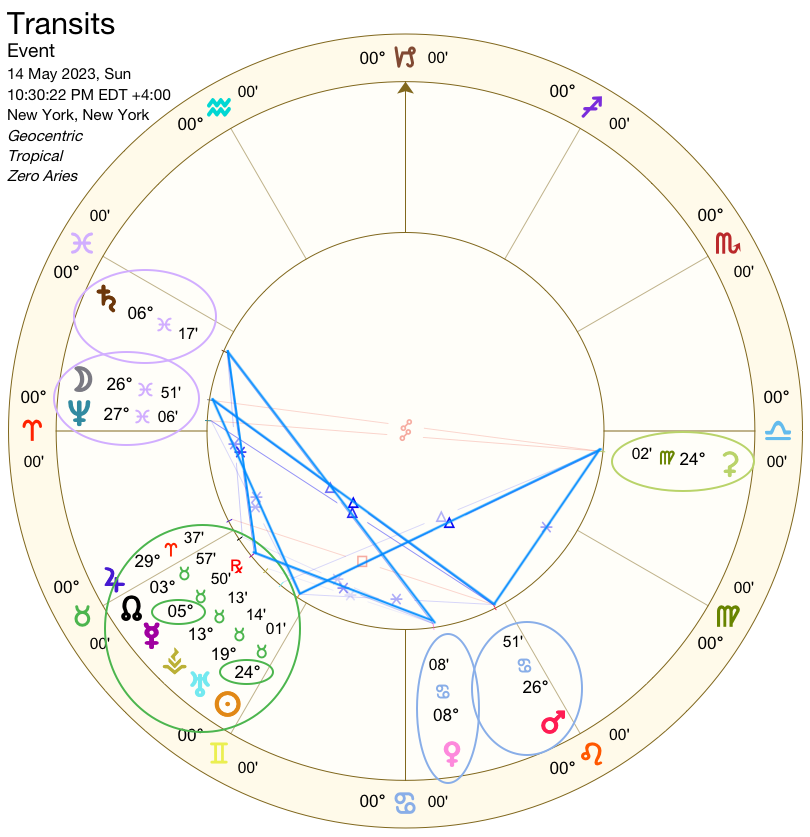 Another nice day. I’m already hearing people making plans for mid-May 2023, so it’s nice to see right on cue slap bang in the middle of the month we have this LOVELY DAY. Saturn and Venus in the water signs bode well for planning something nourishing, fulfilling and enriching among friends and family, with support from Mercury (5–8º Pisces, Taurus, Cancer), the Pisces Moon and Neptune are at ease with the Sun and Mars, too. Ceres again features as a stand out feature in Virgo with harmony from Sun and Mars.

This is a Sunday, and I can’t help but think of a picnic with free-flowing drinks, and a vacillation between healthy fare, indulgent eats and a swell of affection for familiar faces! Plan something sweet and delightful everyone!

A continuation of the above, now we see Jupiter in Taurus (and Pluto, not seen, playing nice with this New Moon). Right after this moment it starts to get testy, however, as Mars moves into Leo – see below! 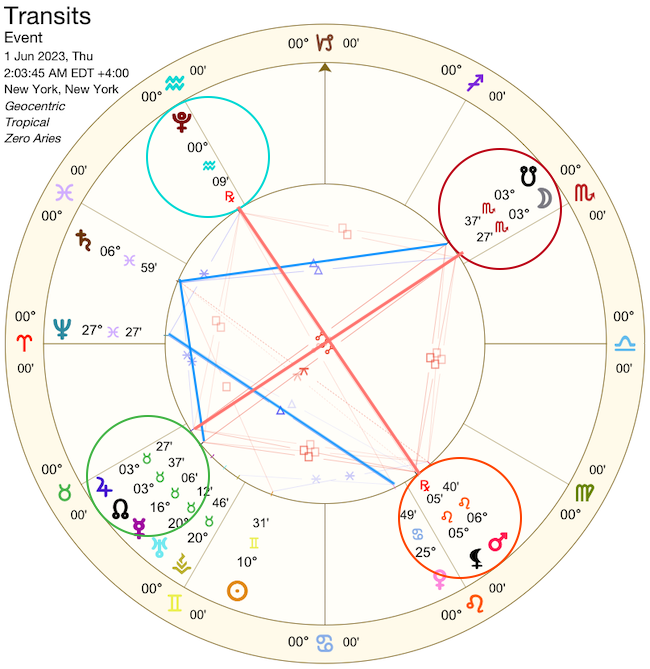 A troublesome square forms as the Moon in Scorpio opposes Jupiter and the North Node in Taurus – both see the stressor of Mars (and Black Moon Lilith) in Leo, and Pluto in Aquarius, which altogether give us a Grand Fixed Cross! The run up to this will be fierce too, with Mars opposite Pluto, then Mars square Jupiter – you can consider May 20th to this point as hairy!!! 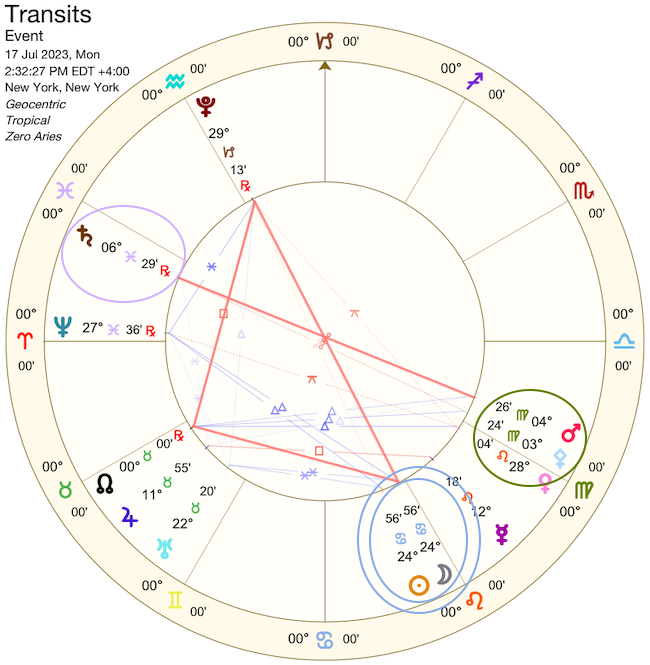 Another New Moon that I see as more important than the others! This one lands (widely) opposite Pluto (back in Capricorn), with further tension thanks to the North Node, just about to enter Aries… Saturn is at odds with Mars (and Pallas) too, which is quite uncomfortable – taking practical action comes up against new rules being explored. 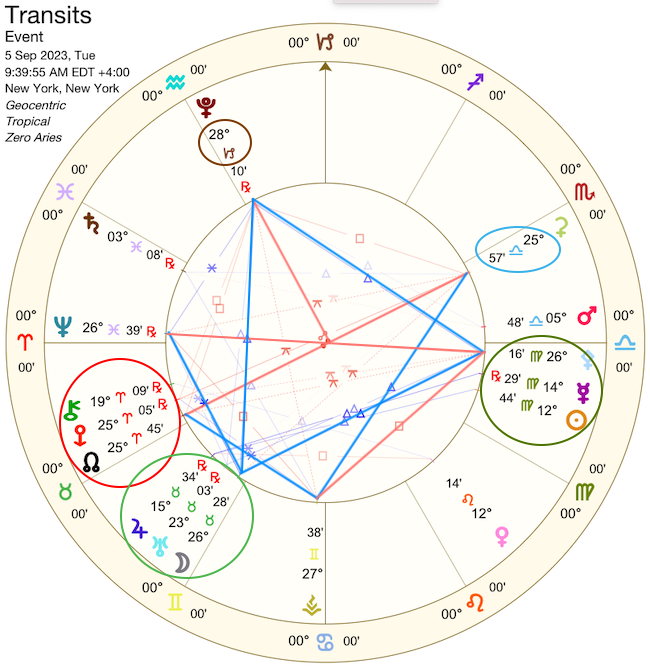 A lot going on here – bear with me! It’s Virgo Season, with the Moon in Taurus, and Pluto in Capricorn so all three earth signs are occupied. Mercury is retrograde but happy in Virgo, with Pallas, Uranus and Jupiter also in earth. There’s tension thanks to the North Node conjunct Eris, and Ceres on the South Node; the only reason I point this out is because Eris has played quite a significant role these past few years (and Pluto is still square this asteroid) and Ceres feels prominent in 2023 too! 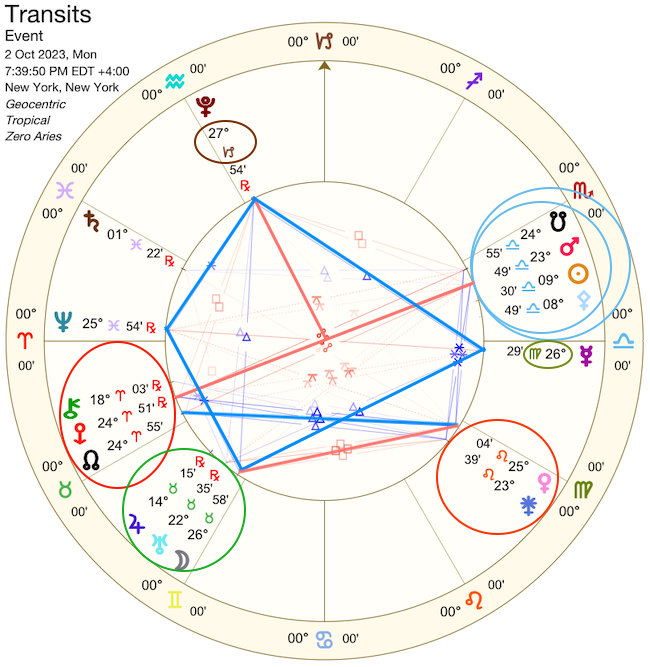 One month on from the last scene, and Mars (in detriment) in Libra opposes the North Node (and Eris, and approaches a square to Pluto), with the Sun and Pallas.

Elsewhere, we’ve a Grand Trine in Earth, with Neptune making a kite! Moon-Jupiter-Uranus in Taurus, Mercury in Virgo, and Pluto in Capricorn puts us at ease, with Neptune in Pisces very familiar too (I’ve not included the opposition of Mercury-Neptune in the diagram, leaving the T-square of Cardinal points more obvious: Aries, Libra, Capricorn).

Mars Retrograde In Gemini 2022 – Slow Down, With Key Dates For This…

My Top 5 Things To Do During Scorpio Season!