He’s admitted to using prostitutes in the past and has a notorious history of cocaine abuse.

With the Sun in such close quarters with these two major ‘generational planets’, Sheen speaks to his people and his message resonates with that of a generation. 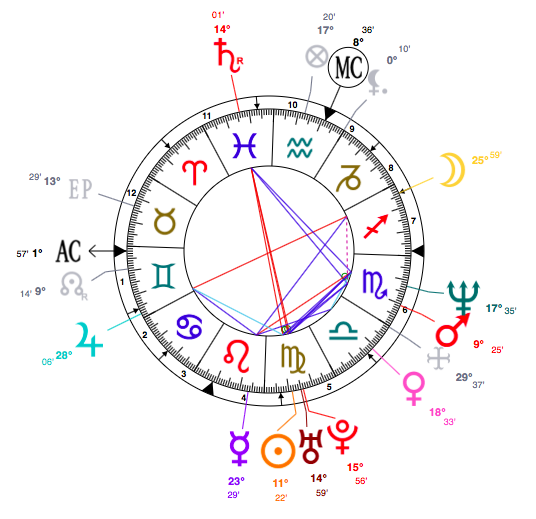 His masculine energy, Mars sits with Neptune in Scorpio, in the sixth house of the everyday – Neptune in this position indicates a person that doesn’t stick to routine and who might like to get lost. It can be someone with health issues, as Neptune blurs the waters of wellness (6th) house.

Mars in Scorpio indicates someone with an ardent nature, someone with a high sex drive and a powerful need to go beyond the beyond, testing the limits of his inner and outer worlds.

Arriving on the 3rd September 1965 at 10.48pm in New York, Sheen was born when the moon was in adventurous, exuberant, unstoppable Sagittarius, and with the sign of Gemini the Twins on the ascendant – with Gemini rising he IS two (or Two and a half Men) men. Gemini is a Mutable sign as is Sagittarius – he has a dextrous approach and needs to be moving and agile.

Excessive Jupiter sits in the first house directly opposite his moon. That’s two major oppositions in the chart (see below).

With Gemini rising Sheen’s chart rules is Mercury – interesting that in this reveal he describes the harmful stories as ‘mercurial’.

Sheen has the north node in Gemini – his fate and his destiny point. It would be wonderful if he shares his journey, as a friend, helping out his fellow man in whatever way he can!

One thing’s for sure, his news is bound to help someone, somewhere. Those words must be so, so difficult to say.

This news has come into the light in Scorpio season, with Mercury and the sun both sitting in the sign of secrets, sex and transformation, aligned in Charlie’s chart around his work and professional life.

Expansive Jupiter has finished rolling over the trio of planets in Virgo, while Neptune is making a beeline for that Saturn.

The Aquarius moon is due to roll over the Midheaven, so it could now get emotional for Sheen…

The star said he learned about his positive status about four years ago, when Jupiter was in Taurus (blowing up his private life – 12th house). Mars may have been dancing on his Virgo stellium but we’d need more specific dates to know for sure.

He was fired from Two and a half Men when Mars went over his Saturn, Venus met the Midheaven and Neptune transited his house of career, March 2011.