Chloë has a LOT of Aquarius energy in her chart with Mercury, Jupiter, Uranus, Venus AND the Sun all in the constellation of the Water Bearer. This makes her a truly wonderful example of Aquarius energy and aesthetics, with only the Moon and Mars left of her most personal planets.

We’ll assume that her Moon is in Aries. Because the moon moves the fastest of all the celestial bodies there’s a chance that, based on birth time, Chloë has her moon in Pisces, however because of her film choices (Kick Ass, Scary Girl…), I’d bet on it being Arien energy!

Mars in Libra is one that will fight for justice, fairness and diplomacy, which is in contrast and direct opposition to the Aries moon that exerts itself independently and with itself in mind.

Saturn conjunct Moon indicates a disciplined, organised and responsible individual that might feel old before their time. The moon governs feelings and emotion, and Saturn’s presence could prompt Motetz to have a mature outlook – good for a young actress to have her head so firmly on! 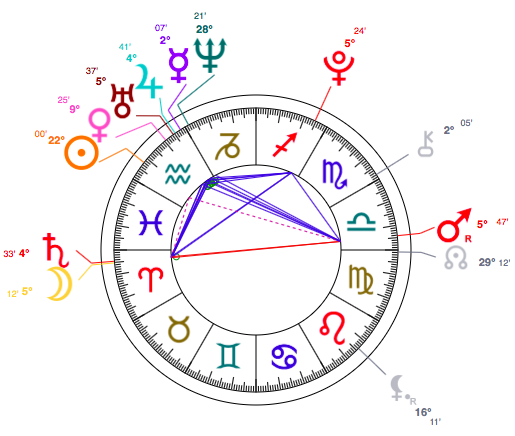