With her moon at 29º Aries, Céline Dion is currently undergoing a transit of Uranus in style...

With her moon at 29º Aries, Céline Dion is currently undergoing a transit of Uranus in style…

How’s this playing out?

Earlier this month, Dion launched a gender neutral children’s clothing brand called CELINUNUNU, and though she’s getting some criticism for it we feel the stars are on side…

Uranus is the planet of ambiguity and androgyny. His myth is a-sexual, as Cronus / Saturn castrated him, throwing his severed genitals into the sea “around which a white foam spread and “grew” into the goddess Aphrodite”.

This truly teaches us that the greatest beauty is born out of great pain!

A nineteenth century term ‘Uranian‘ referred to a person of a third sex — someone with “a female psyche in a male body”, later extended to cover homosexual gender variants, and a number of other sexual types.

CELINUNUNU considers itself a brand that “liberates children from the traditional roles of boy/girl, and enables younger people to grow on values of equality with the freedom to strengthen their own power of personality based on mutual respect.”

Its goal is to let kids be who they want to be, to “enable [children] to be who they are, so that their choices are driven by their own true essence and free spirit, beyond stereotypes or any norm.”

How awesome that Celine is using the radical impulse of Uranus to liberate children – especially since Jupiter is now in her fifth house of play and kids!

She has until March 2019 to harness the full potential of this astrological transit.

Dion has an exact conjunction between Venus (exalted) and Mercury in Pisces, not only giving her a beautiful, romantic singing style but a gentle, soft demeanour and enigmatic presence.

Still, she has a lot of astrological points tallying up in Aries, including her sun sign, Midheaven point, Saturn, north node and moon at the last degree of this sign (29º). 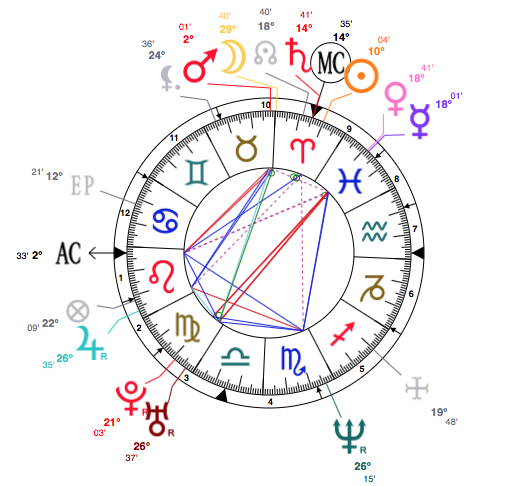