Monica Anna Maria Bellucci was born on the 30th September, 1964 in the Italian village of Città di Castello, Umbria.

She originally followed her Libra sun, pursuing a career in the legal profession, modelling on the side (another Librian occupation), which led to acting – honouring the Leo moon, Mars in Leo and Venus in Leo.

As a Capricorn Rising star, Monica’s chart ruler is Saturn, sitting at a power degree of the zodiac wheel – 29 of Aquarius.

This planet forms a Grand Fixed cross involving an opposition to beauty planet Venus (24 of Leo), lucky Jupiter (25 of Taurus) and Neptune Midheaven conjunction, at a wider orb of 16 degrees of Scorpio.

This speaks to me of a public role that’s very glamorous and sexy, beautifully dramatic and lucrative but that has had to be worked for. Perhaps there’s been some sacrifice along the way…

I also think it’s super how Monica is a currently being heralded as a beauty icon and sex symbol over 50 – mature Saturn is still working in her favour! 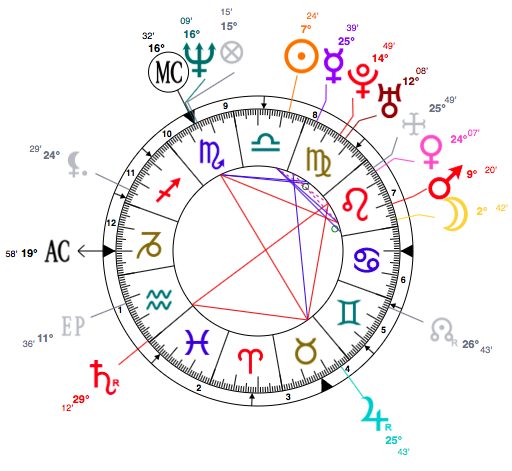