Major controversy around this movie, was it written in the stars? 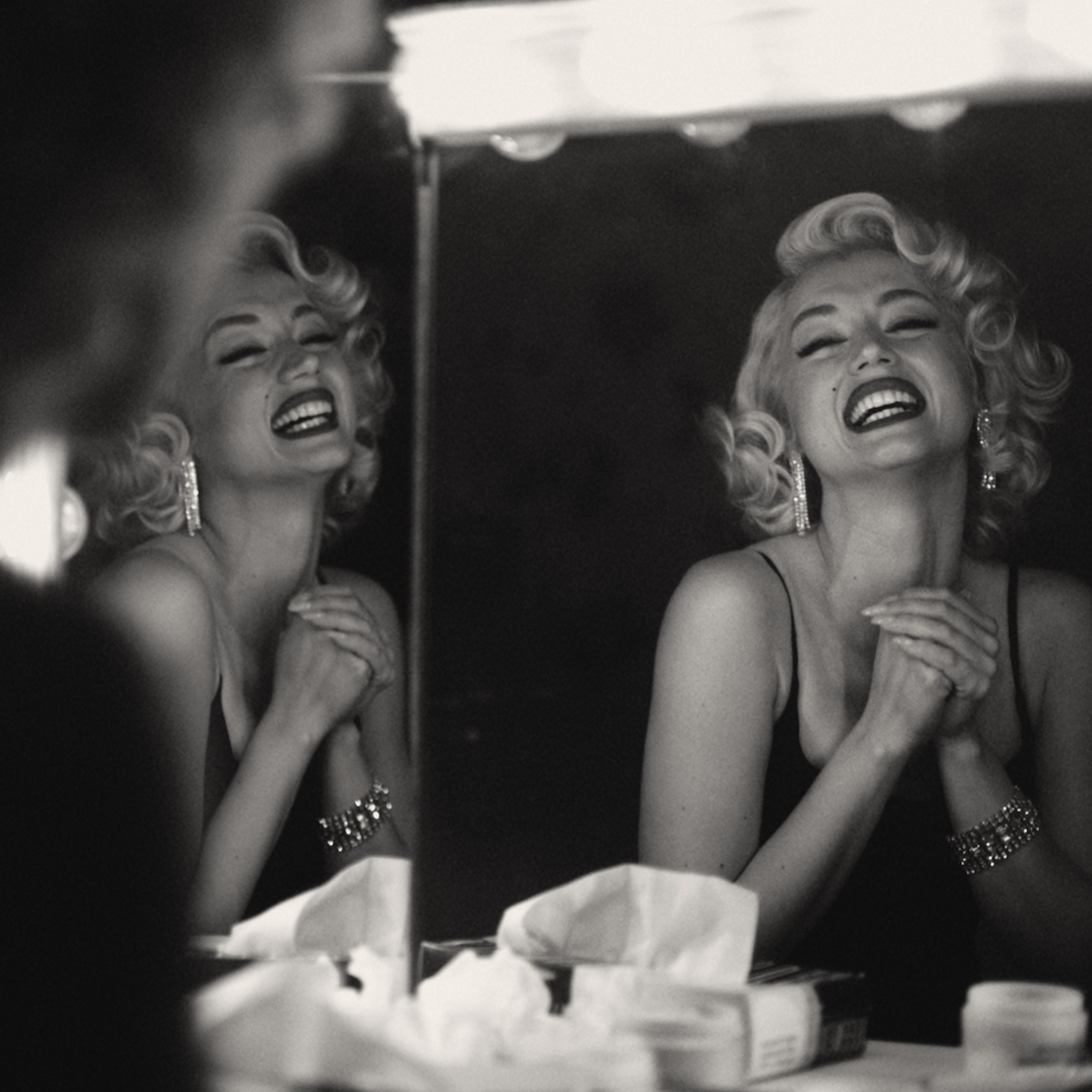 I’m a huge fan of celebrity culture (as if you did’t know!) and Marilyn Monroe has fascinated me ever since I was a little girl.

I’ve been aware of her birth chart (and studied it) for years, and like to compare and contrast the people who imitate her look.

Now, let’s look at the synastry between Monroe and Ana de Armas, ahead of Blonde, which comes onto Netflix this September.

Sadly, we do not have a birth time for Ana! 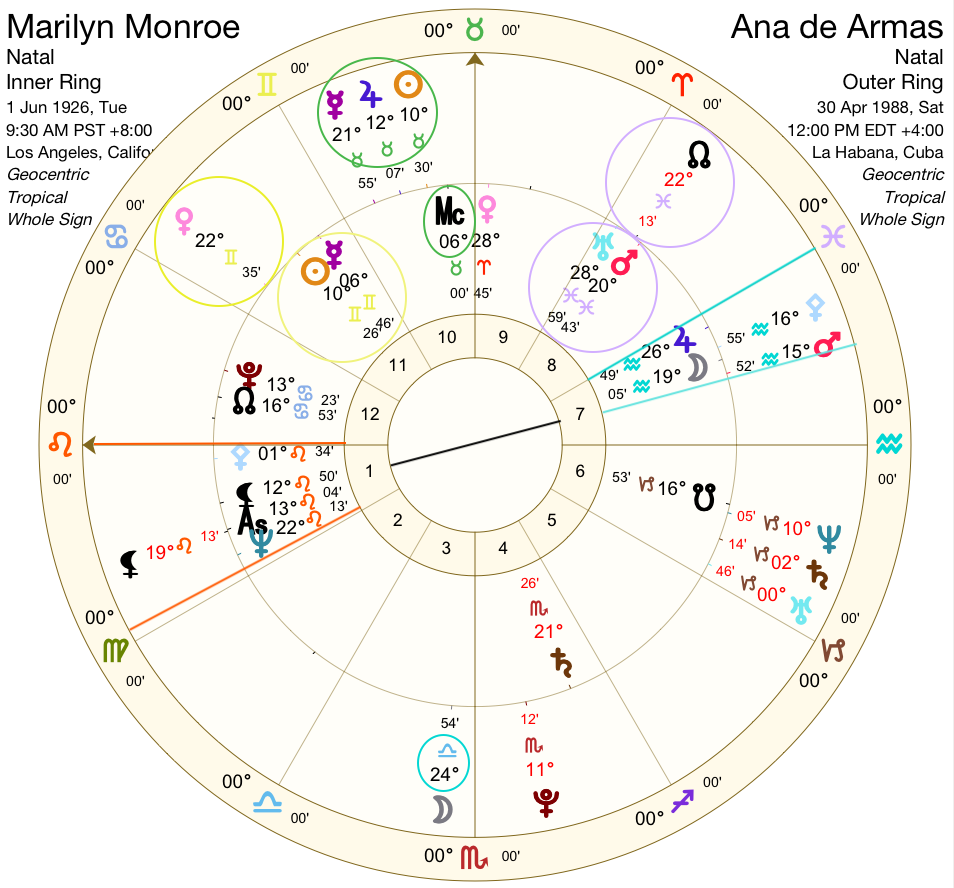 Firstly, the timing of the Netflix movie is significant.

2022 is a big year for Pisces activity (and Taurus-Aquarius), with Jupiter dipping back and forth into this sign, and the ongoing presence of Neptune in Pisces, which in March rolled over Ana’s North Node.

Pisces is a slippery sign, signified by two chaotic fish, and is without boundaries, a water sign that can flow everywhere and anywhere (including where it doesn’t belong!)

Neptune has been transiting Marilyn’s Mars-Uranus pairing in the sign (and her eighth house) for some time.

This year has been prolific, with both (Pisces Moon) Kim Kardashian wearing her Happy Birthday dress to the Met, and now this movie.

Note that Ana’s Venus-square-the-Nodes is similar to the Mutable signature for Monroe – Marilyn’s Sun-Mercury in Gemini is at odds with her Mars-Uranus (although not nearly as tight a square).

One of the things that makes Monroe so iconic, is her Leo ascendant, with Neptune rising in Leo.

Neptune is directly opposite her Moon and Jupiter pairing in Aquarius, one of the reasons she was so well placed to have a great understanding of people, her audience, and all those she ‘related’ to in the world.

Ana’s Libra Moon is trine Marilyn’s Moon-Jupiter in Aquarius, and Ana has Mars (on Marilyn’s descendant) and Pallas in Aquarius, suggesting she’s able to set aside any feelings to really get to the complex issues Monroe was dealing with in dealing with others.

Both have Black Moon Lilith in Leo, with Ana’s BML conjunct Marilyn’s Ascendant/Neptune. 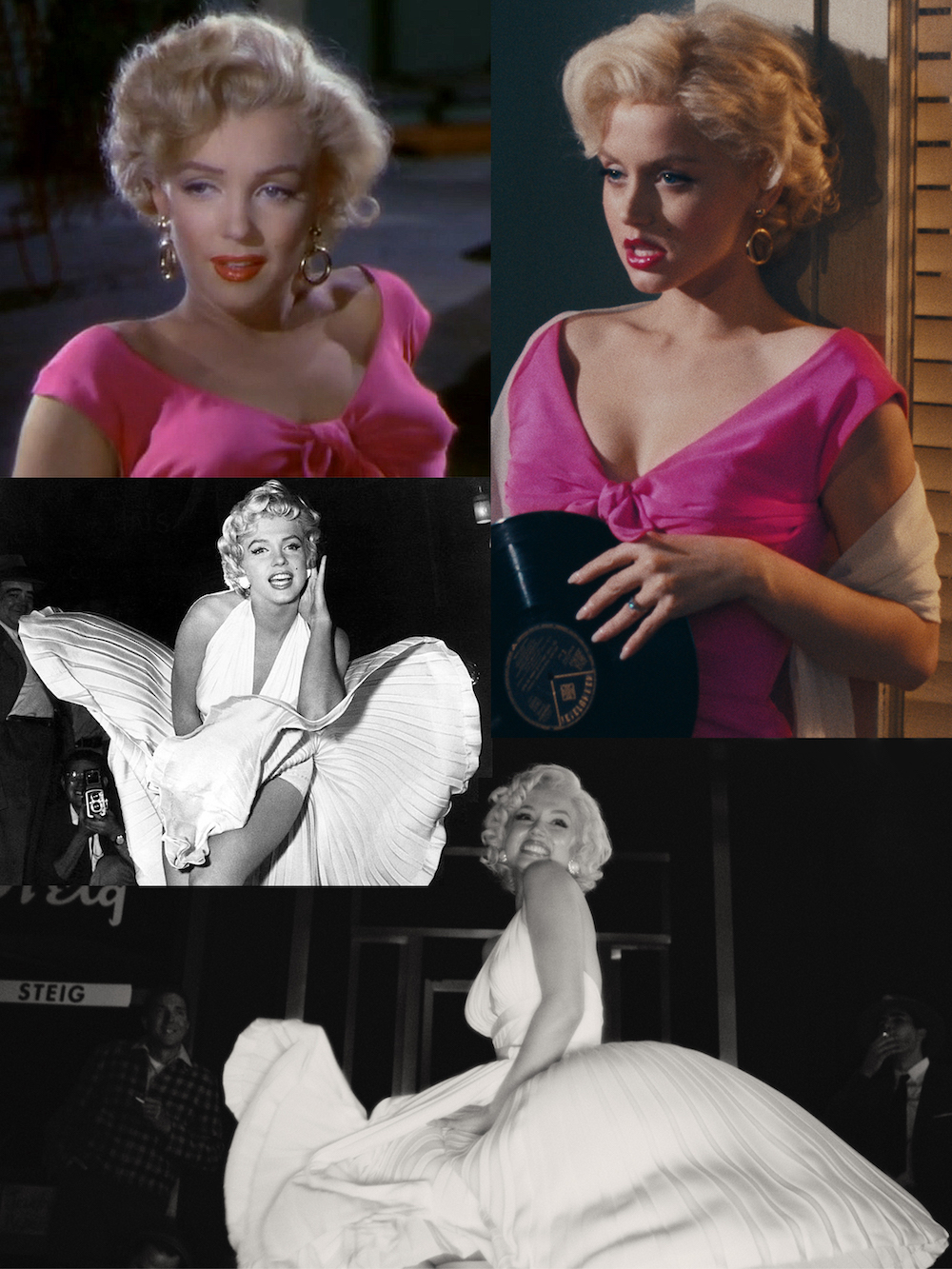 Monroe was a Gemini Sun-Mercury, married to playwright Arthur Miller, photographed with books in hand, demonstrating her intellectual side – even if she was portrayed as the ditzy, dumb blonde.

She displayed the multifaceted curiosity of a flighty Gemini, and I’m glad to see Ana has Venus in this sign.

Although the two stars planets aren’t conjunct, I like that the actress has a significant Gemini signature – after all it rules over her Sun, Jupiter and Mercury in Taurus!

Marilyn’s Midheaven at 6º00′ Taurus signals a career and public image synonymous with beauty, sensuality and the arts; Ana has a trio in this sign.

With Ana’s planets prominent in Monroe’s tenth house, she is well-placed to represent her, ‘showing up’ to play the part, and stand in for Marilyn.

When we look again at the Nodal Axis for both actresses, we see Ana’s Taurus placements sextile Monroe’s Pluto-North Node in the twelfth house, and Ana’s North Node in Pisces is trine to Monroe’s Saturn (with Mercury in exact opposition), hidden at the base of her chart in Scorpio.

And yet, this movie has sparked major controversy.

I only recently learnt this is not a biography movie but in fact a movie based on FICTION!

Uranus is now transiting Taurus, with a final square to Saturn in October 2022 (read more here).

The public image of Marilyn is stirring up excitement and creating a fractious discourse (very much so on Twitter!)

With a square to Saturn in Aquarius and her seventh house ‘other people’ are involved in this dynamic, for Ana, as a Taurus, she is pinned as the Maverick, the face of doing things that are rebellious, with her public image hitting a wall (Saturn)…