Kate Hudson was born in LA on the 19th April, 1979 to Goldie Hawn and Bill Hudson, although she was raised by Kurt Russell.

Venus in Pisces gives this very fiery chart a softer edge, as does the watery Crab on the ascendant, but it’s undeniably a strong Aries presence that Kate embodies, with her Sun, Mercury, Mars and Midheaven all in the sign of the Ram. With all this Aries energy it’s no wonder Kate looks Ravishing in Rouge – red is a perfect colour for the Aries woman, and she’s so often seen in a bright poppy hue at premiers and shows. The other key colour for Kate is white (plus creams, soft greys, very pale silvery colours reflecting the moon.) as her Cancer rising really suits the shade.

Aries are known for their optimistic, sunny outlook however Kate was born with Jupiter on the ascendant making her even more so. People with this planetary placement are known as the epitome of optimism, with a great sense of self and faith in their abilities. They’ve also got larger than life personalities, which I think is where she gets her comedienne tendencies from!

I think it’s Kate’s Venus that’s responsible for her gorgeous hair, which is very Piscean, and it’s probably why she’s such a good dancer too!

Moon in Capricorn gives Hudson an ambitious streak, and also reveals her approach to mothering and her mother, Scorpio Goldie Hawn. Interestingly Scorpio rules the fourth house, which is the area in the chart resonating with family, home and ‘mother’, so the Scorp influence is very evident in the chart. 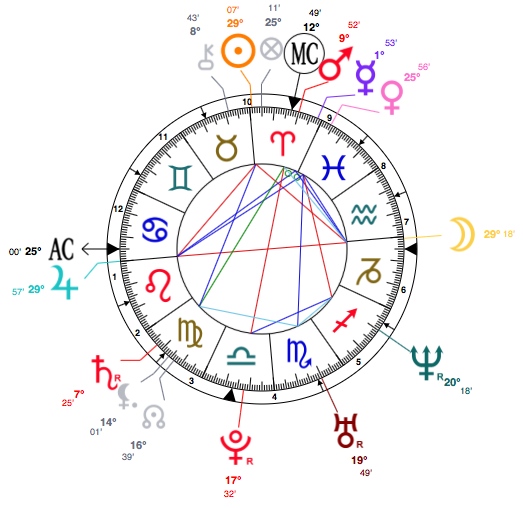