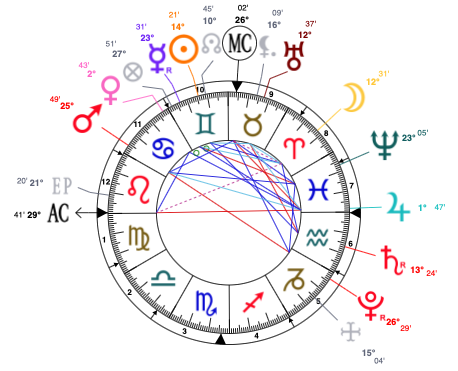 The new member of the Royal Family was named after her great-grandmother, Queen Elizabeth II, whose childhood nickname was Lilibet, and Princess Diana. Her Aries Moon is exactly trine the Queens (12º31′ & 12º07′), while her Venus ta 2º43′ Cancer is conjunct her late grandmothers Mercury at 3º12′.

But Lili is a Gemini, like the late Prince Philip.

Thankfully, Harry has a Gemini North Node, Meghan (a Leo) reflects the face or rising sign of Lilibet, so she will likely look just like her mother!

Duplicitous Gemini are known for their adaptable nature, and ability to keep two sides of the story going (single-handedly!) I wonder if Lilibet will have a unique skill for life in the public eye, answering questions, keeping one hand in the Royal Family yet navigating life as a famous person of note in the USA, too.

Her chart ruler – the Sun – is super prominent with Mercury at the top of her chart, in the most public house of fame and notoriety.

She is a born star and leader!

With the astrological co-pilots Venus and Mars also high in the eleventh house of networking, she will likely be a friend to all (Meghan also has Mars in Cancer, so they may be on the same page and fight for the same causes).

While Lilibet can make her way in the world (a social butterfly and caring humanitarian) there will always be a power struggle, with domineering forces and control that stop her driving ahead too fast!

The Aries Moon is very interesting – it appears right on Meghan’s Midheaven! While Meghan has Moon, Jupiter and Saturn in Libra, Lili presents a different dynamic in the family.

Her emotional nature could be fiercely independent, a pioneering daredevil or simply willing to take risks to go the distance.

It’s not a great surprise that Markle ended up in the Royal Family, as this kind of signature lends itself to a life of significance.

Kate Middleton was born less than an hour before a Lunar Eclipse, while Prince William was born just after a partial solar eclipse.

While we can’t say some people are more important than others, in this case it’s kinda true (I don’t make the rules!)

Lilibet Mountbatten Windsor was also born during Saturn (in Aquarius) square Uranus (in Taurus), a signature that bought shake-ups to the Royal Family, and signalled her parents giant step back from the institution.

This was huge, monumental, and Little Lili is a reflection and symbol of this change, carrying with her forever the spirit of unconventionality – the choice to go a different way, against all odds.

I can’t wait to see what rules will be made or broken by this new generation of Royalty!