An Aquarian Icon: Harry Styles Is Our Main Muse…

The performer was born as a cluster of planets gathered in the progressive Aquarius Zodiac Sign!

Born February 1st, 1994, he’s an Aquarius but also boasts a further three personal planets in the Water Bearer’s sign. The generational planets (Neptune, Uranus, Pluto) are slow-moving, and while they can absolutely color our personality it’s the more personal influences (Sun, Moon, Mercury, Venus, and Mars) are the primary building blocks of our horoscope.

We do not sadly have a 100% accurate birth time for Styles, which is a great shame as he has such a strong Aquarius signature, it’d be awesome to know if this stellium did feature in his fourth house. This would be the case if he were Libra Rising; here are his confirmed placements:

Although Libra is one of the two Venus-ruled signs and gives a sweet (dimpled) look, which fits, it would mean he’d have some notable relationship changes with his Uranus opposition in the past couple of years. I’ve not scrutinized his love life – I have more important things to do! But it is possible that this transit was the breakup between him and Camille Row. Again, I’m not one to probe the romantic life of celebrities – I just like their aesthetic choices!

Still, we can tell a Lot about the Aquarian man from Harry’s bold, wildly eccentric dress and beauty.

I am so thrilled he indulges in colorful nail polish and incorporates gender-fluid touches to his wardrobe. A Leo Midheaven (with the birth time of 12.06 am) would give the singer a love of the theatrical, and suits his vocation of the performer, while the Libra Moon makes him a dab hand at dressing beautifully.

Aquarius is known for their androgynous look, strong jawline, and ability to wear chic, timeless and futuristic looks. They are the coolest zodiac sign – both emotionally and in terms of their choices and direction.

Another thing I find compelling about Harry’s birth chart is the conjunction between Mercury and Satun; Saturn is the traditional ruling planet of Aquarius (Uranus is the modern ruler). When he was born Saturn had just moved into Pisces, at  0º in the chart. This suggests that while the strong Aquarius signature encourages him to be open-minded, liberated, free and progressive, Saturn’s presence asks that he discipline and become an expert, too. This might be the reason he’s come so far in the music industry and his career – he takes life seriously!

I would say Harry seems pretty chilled. He’s funny, sweet, and the guy you want to be friends with! But beyond that, he might be cautious and reserved, way more responsible than he comes across. People born with Saturn in Pisces are here to learn how to ground the imagination – through songwriting, a spiritual discipline, and work that has a compassionate or altruistic angle. Because he has Saturn at the 0º – a powerful placement – it could be that he’s here to bridge the transition between (air sign) Aquarian thought and (water sign) Pisces sentiments.

The icon also has Jupiter and Pluto in Scorpio square his planets in Aquarius, so he might feel a bit weird or uncomfortable as a ‘sex’ symbol, and help us all – as a collective – smash ideas around what is ‘attractive’, seductive, and how to channel our love of ‘stars’.

I look forward to Harry moving into an even more prolific role as a spokesperson and advocate for worthy causes. Star Sign Style loves your choices Harry! 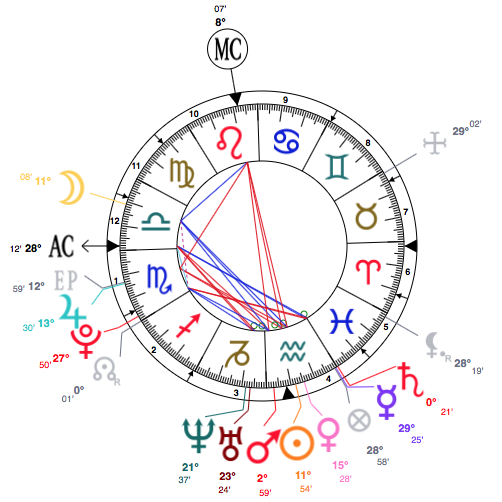