Dakota Fanning is a perfect example of pretty Pisces, with her sun and Venus both in the sign of the mystical fish.

Born 23rd of February 1994, in Conyers, Georgia, Hannah Dakota Fanning is a hugely successful movie-star who began acting at a young age.

Not only was Dakota born when three planets were in the dreamy, ethereal sign of Pisces, its ruler Neptune sits in a significant position in the chart – at 22 degrees of the zodiac sign Capricorn, closely aligned with the Midheaven, a point of the personal horoscope governing public reputation.

This is present in the natal charts and horoscopes of those people with incredible intuition, and also those that have a glamorous persona. Neptune is the planet of Hollywood, the planet of film and photography, and of illusion.

The birth chart is a ‘bucket chart’, as everything in the horoscope points towards one point – the moon in Leo. Leo the lion being is the thespian and creative, the performer of the zodiac, so that all of Dakota’s concentrated energy is directed towards an innate talent for theatrics!

The perfect chart for an actress: 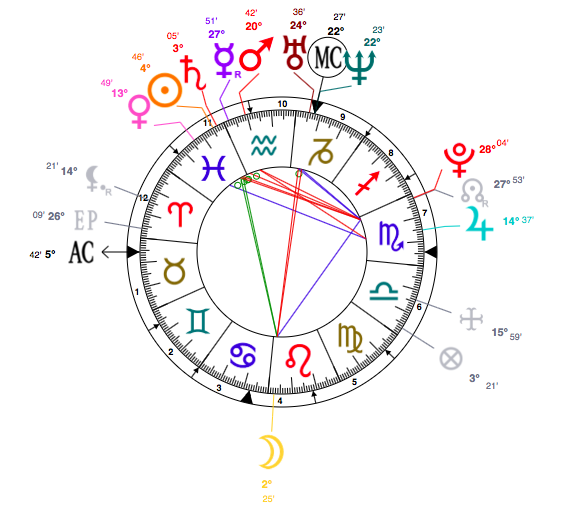 How Dakota works her Pisces–Leo combination…

Fashion that flows – with pride!

Pisces the fish is the original Mermaid of the zodiac, while Leo is the King of the Jungle. Dakota strikes a beautiful balance and expresses these two sides to her personality through fabulous fashion…