The myth of the Mother of the Sea – and potential for excess in how we treat Ocean Life!

In Inuit mythology, Sedna is a key figure, Goddess of the Sea and Marine Animals… 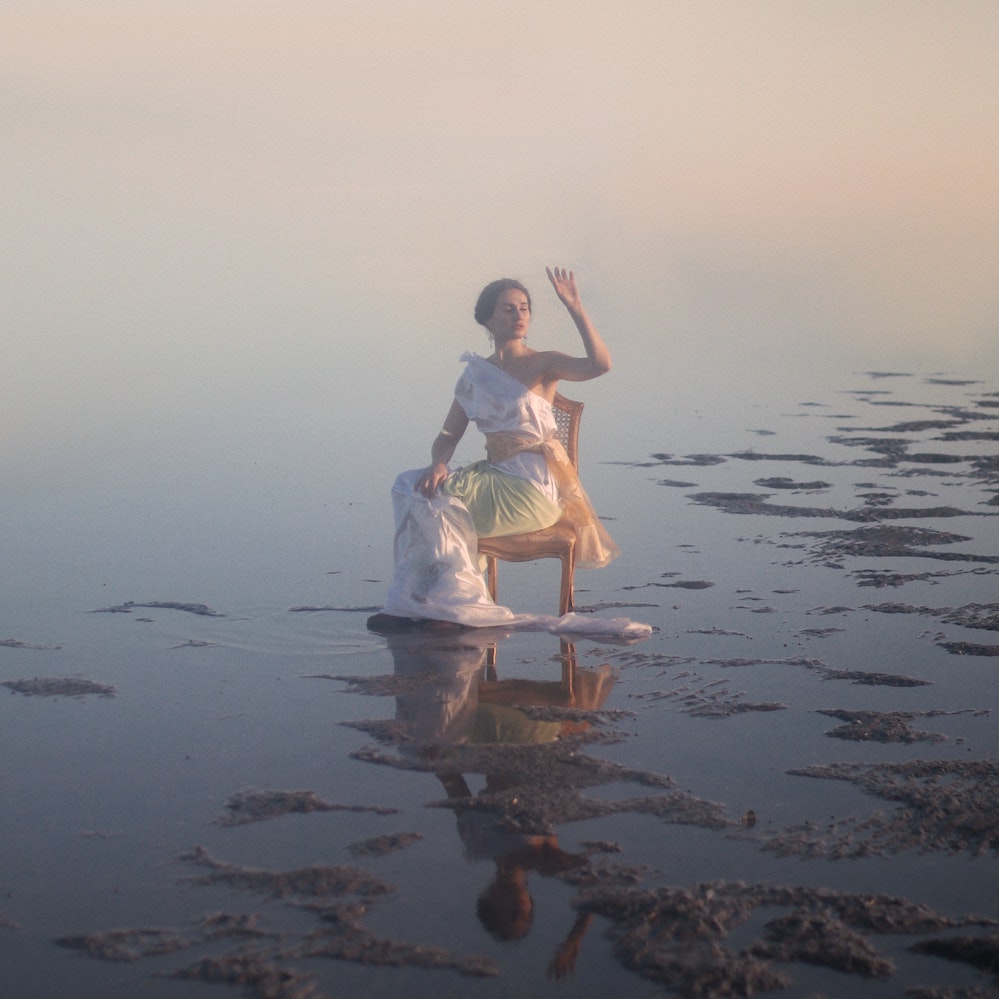 Sedna is said to live in a cave at the bottom of the Arctic Ocean – one of the most feared and vengeful spirits and deities of the artic world.

The Myth Of Sedna – Transformed Into A Goddess…

Sedna was a very beautiful maiden, a human, who rejected many marriage proposals from those in her village – hunters.

One day, an unknown hunter appeared and Sedna’s father (Anguta) agreed to give her to him as wife in return for fish.

He then gave her a potion that sent her off to sleep, and the hunter then took her to a large nest on a cliff, thus revealing his true form: a great bird-spirit (some say a raven)(.

Sedna then wakes surrounded by birds, floating on an icy island, imprisoned.

Her father attempts to rescue her in his kayak, while the bird creature is away but this enrages the bird.

He calls to a spirit of the sea to help him, the sea spirit locates the kayak with the two aboard, and creates a storm and huge waves to kill them both.

The father throws Sedna overboard, hoping this will appease and pacify the angry god.

Sedna clings to the kayak but her father grabs a little axe and chops off her fingers before striking her on the head.

Three finger tips each became a different species of seal, while an entire finger became a whale…

The blow to her head sends Sedna to the ocean floor, where she resides, commanding the animals of the sea as her companions, held in her hair, releasing them only when appeased by offerings, songs or a visit from a shaman.

Legend has it that if humans anger her, she can stop them coming to hunting sites, thus causing famine. 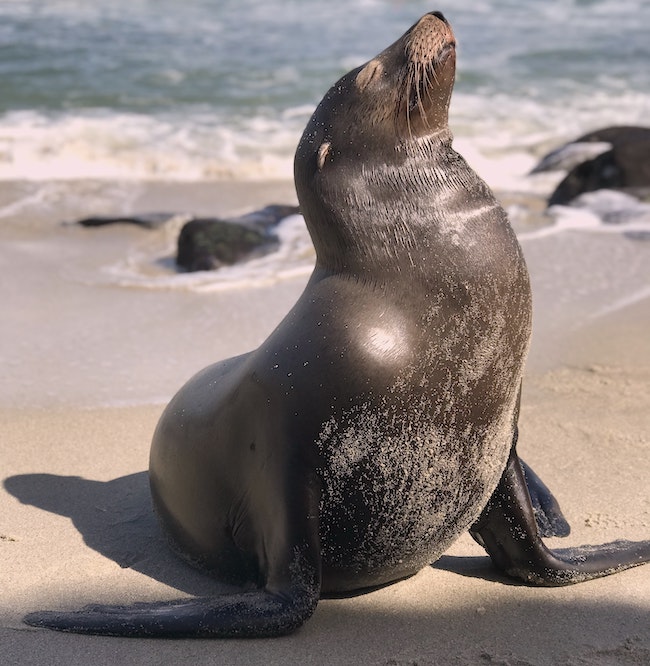 One Of Sedna’s Sea Creatures! Withholding…

Varying versions exist, yet in all the myths, stories and traditions, Sedna is out at sea in a kayak with her family when a storm begins.

Her parents think she is to blame and throw her into the sea; she clings to the kayak, but one-by-one her father cuts her fingers off! Her fingers turned into sea creatures, who she gains control over [sea mammals – seals, walruses, and sea lions].

She always sinks to the bottom of the sea, and ends up worshiped by hunters who depend on her goodwill to supply food.

She is generally considered a vengeful goddess, hunters must placate and pray to her to release the sea animals from the ocean depths for their hunt.

A one-eyed giant. A frightfull old hag, but she was young and beautiful when her father threw her in the sea as a sacrifice. A sorcerer wishing to visit Sedna must pass through the realms of death and then cross an abyss where a wheel of ice spins eternally and a cauldron of seal meat stews endlessly. To return he must cross another abyss on a bridge as narrow as a knife edge.

As a human she was young and beautiful, as a goddess who has transcended she is frightful!

Discovery Of Asteroid Sedna In 2003… 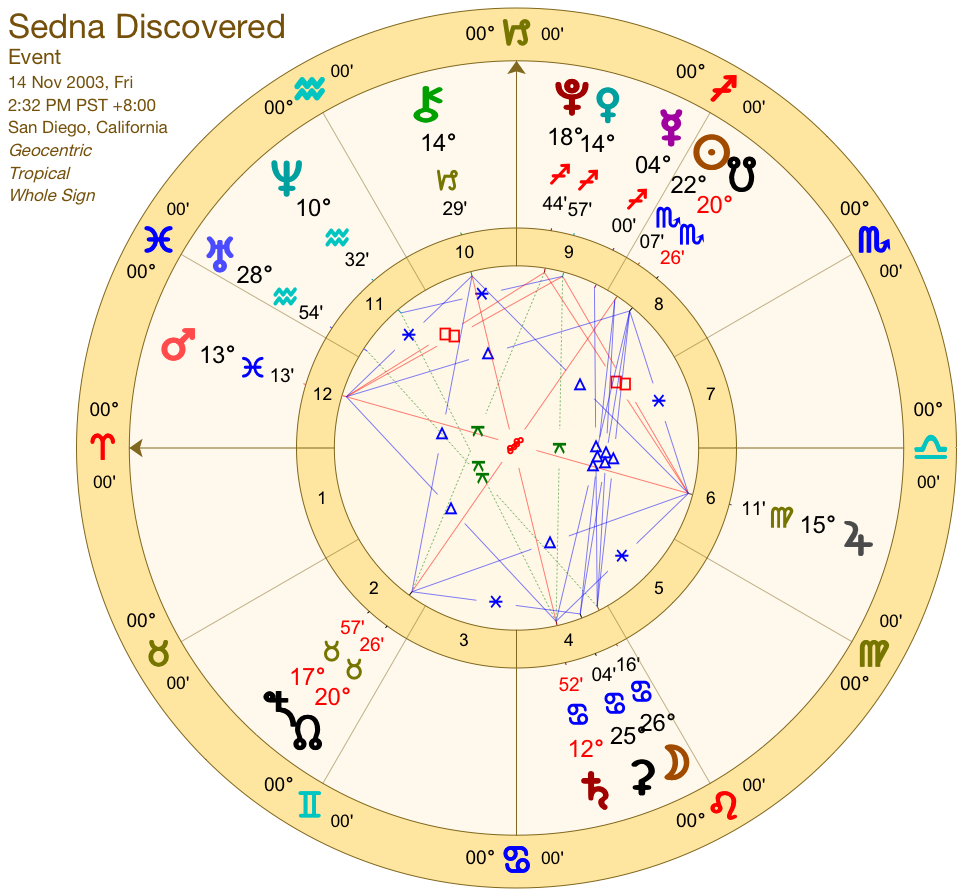 They noticed this small body in the outer solar system is almost as red as Mars, in line with its Aries Rising birth chart!

What’s more, the North Node was almost conjunct the celestial object, with a nice sextile to Ceres and the Moon. We also have a trine to Jupiter and a trine to Chiron, and a Quincunx to Pluto.

The chart ruler – Mars – is submerged in Pisces and the twelfth house, again in a sextile to Sedna, with a trine to Saturn.

Sedna is three times farther away from Earth than Pluto, making it the most distant known in the solar system.

Meaning Of Sedna In Astrology – And In Our Horoscope…

Sedna spends a long time in each sign, and on February 7th/8th 1968 (depending on time zone) moved into Taurus.

I wonder if this current transit of Sedna through Taurus is reflected in our mass consumerism (and greed) around sea life – fish farming and Aquaculture, as reported on documentaries such as Seaspiracy. 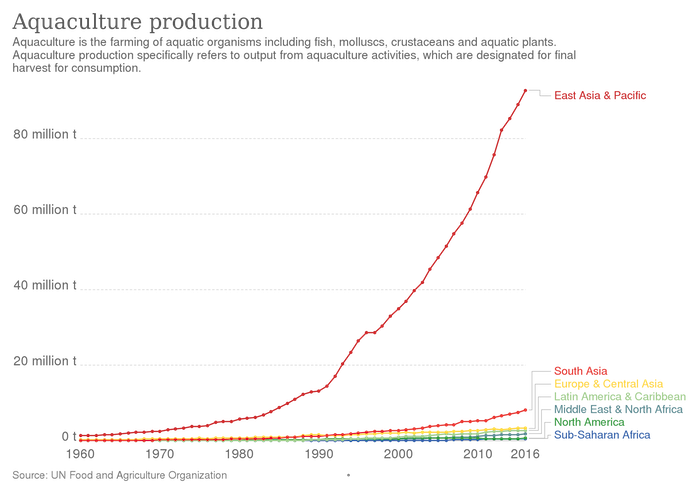 Here’s a quick graph from wikipedia… Remember Sedna entered Taurus in 1968 and was discovered by us in 2003!

Taurus is the sign of building, development and how as human beings we farm the land – or in this case the oceans and seas. 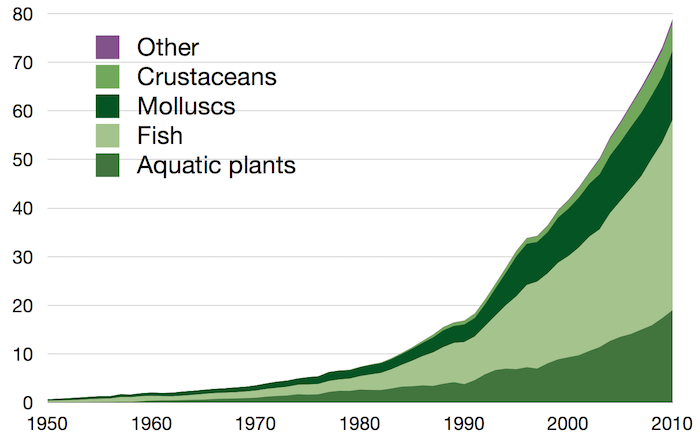 All the creatures guarded by Sedna…

It’s become apparent to me that we exploit Marine Animals – those taken care of by Sedna – for our own comfort and satisfaction.

There’s perhaps something to learn about our collective interests in eating so much sea life, even holding fish, seals, sharks and whales in tanks and aquariums…

What is the takeaway and lesson to learn?

Alan Clay is perhaps the leading expert on Sedna, and links it with Ceres because they both likely have internal oceans.

They both speak of a nurturing process.

He also links it with Saturn because their daily rate of spin is the same, so they have the same day to day practical perspective and both speak of limits.

What’s more, Sedna is the new ‘outer limit’ of the solar system, (previously Saturn was our indication of limits), three times farther away from Earth than Pluto and the most distant known celestial body.

“Sedna represents the weird new outer limit of our consciousness, which is going to stretch our concepts of reality and pull us to look at ourselves as part of the very big picture.”

Interesting that for the ‘birth chart’ of Sedna (and its discovery) we see ‘nice’, harmonious aspects to Ceres and the Moon conjunct in Cancer (with the Moon in its domicile sign), and the chart ruler (Mars) almost exactly trine Saturn! 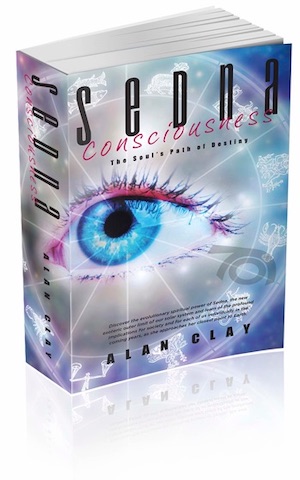 Go to dwarfplanetastrology.com for more from Alan Clay!

Where Is Sedna In My Chart?

Simply go to astro.com, under “All Horoscopes at a glance”, then “Extended Chart Selection”, then scroll to the very bottom to “Additional objects” and “Manual entry:”.