A look at the star chart of Kylie's (ex) bestie!

Libra babe Jordyn Woods is getting a pretty rough ride this week. 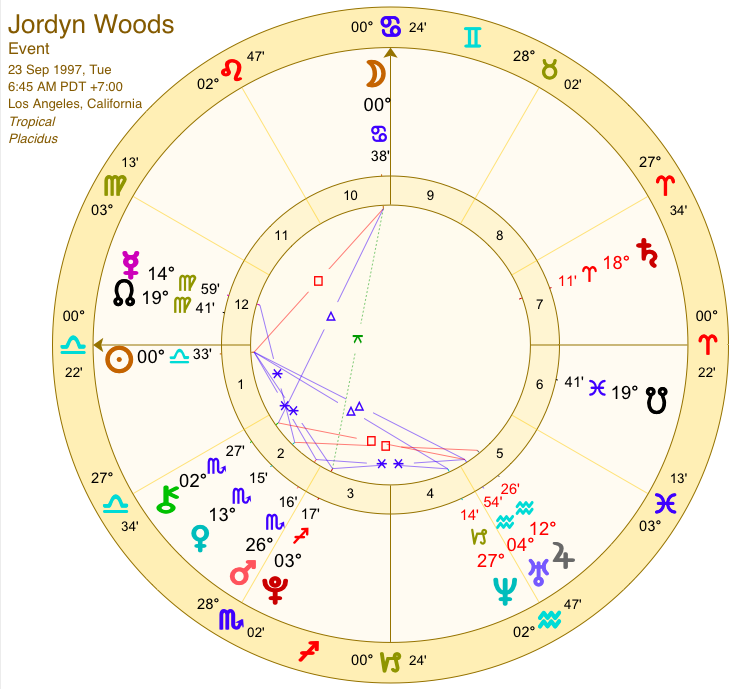 We don’t have a birth time for Jordyn, however we do know she was born at the initial degree of Libra – 0º.

Another interesting influence she’s experiencing is the karmic south node on her Neptune, the planet governing social media, mass exposure and the lens of film.

We don’t know how the planets are positioned in the personal horoscope, however we do know the signs.

The moon had slipped into Cancer early in the morning of September 23rd ’97, and depending on her time of birth there would be varying degrees of tension between her sun and moon sign – it’s possible she was born exactly during the waning square.

Venus and Mars were in Scorpio, while Mercury in Virgo was with the north node of fate, indicating that writing, speech or communication will be key to the way Jordyn moves ahead in life, and overcomes her challenges.

We also know the way the planets are interacting with each other, and can see that the sun in Libra aligns with powerhouse Pluto, and radical Uranus in its home sign Uranus.

I hope Jordyn doesn’t get too much heartache over everything that’s happened. In January 2017 she lost her father as Mars and Chiron conjoined her south node, and Uranus was conjunct her Saturn in Aries.