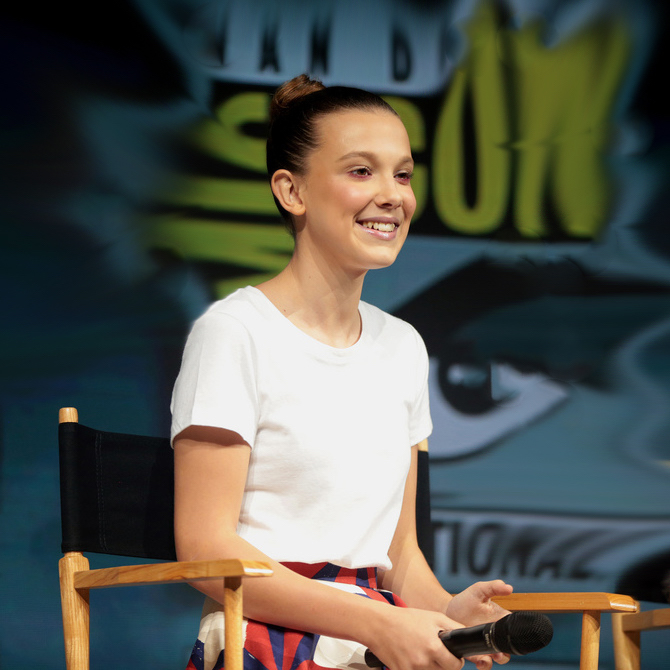 What is revealed by her personal horoscope and birth chart? 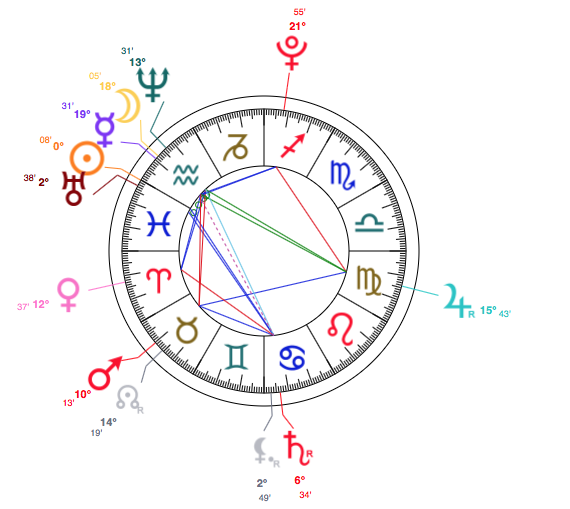 Although we don’t have a birth time, we do know that Millie was born with the moon passing through the zodiac sign Aquarius.

If she was born before 8.50 am she would also be a sun sign Aquarius, if born after, a Pisces. I’m convinced she’s Pisces, with her first role typically Piscean, a fantasy drama series Once Upon a Time in Wonderland, based on Alice in Wonderland. Also, the progressed sun would swiftly make its way into Pisces, so I’ll consider this her star sign!

I love seeing her in princess dresses, with her signature quirky style! She has a particularly Uranian birth chart, with the sun within a tight orb of planet Uranus, lending a vibe of differentness to her sun.

I also love this – now iconic – image of Millie, the lowered brow of Aries the ram, the bloody nose! So Aries.

Venus in Aries is brave, direct, and a bit of a tomboy – just like Eleven. However there’s a much softer side to both the character and actress, with the moon so closely aligned with Mercury pouring in a good dose of emotional sensitivity and understanding.

Mars in Millie’s chart is extra important, as a planet sitting with the karmic point of future and destiny. Leaning into situations, circumstances or work that has a Mars-like energy could be written in the stars, and with Uranus moving into Taurus we’ll see this activated in the years to come.

In April 2018, Uranus aligned with her sun and she became the youngest person ever to be included in TIME magazine’s list of the 100 most influential people in the world. Later in the year it was announced that she had become the youngest person ever to be appointed as a UNICEF Goodwill Ambassador, these are the signatures that will be refined as Uranus makes his way to her nodal axis.

Finally I adore the literal manifestation of Millie’s moon in Aquarius and her part on the show Stranger Things, which totally translates – as above, so below! The TV premiere happened during her Jupiter Return, and with the north node transiting her Jupiter.

She is the perfect actress to play an outsider, as an Aquarius moon brings a deep understanding of what it’s like to feel outside the parameters of ‘the norm’

We love you Millie, and can’t wait to see what’s next!