How to handle your Saturn Return? Check out Maria Sharapova, who is currently handling her drugs test scandal with perfect poise! She maybe under fire from tennis peers, however this PR Week article quotes:

Her tack was one of honesty, directness, and accountability. She did not use spokespeople or press releases or even Oprah to come clean. … Her forthrightness is a case study in proper reputation management. It’s a stunningly bold”

“Throughout my long career, I have been very open and honest about many things, and I take great responsibility and professionalism in my job every single day, and I made a huge mistake,”

This star has a close meeting between communication planet MERCURY and big ol’ bountiful Jupiter, which EXPANDS what it touches – this means Maria has a mighty does of Mercurial communication power in her birth chart (see below), a message that is impactful and far reaching.

This pairing of planets makes a sextile – a harmonious aspect to energetic Mars in Gemini (‘the Twins’ and the tennis-ruling zodiac sign in my eyes, with love-ly Libra).

Therefore, there’s an easy talent for competitive, athletic pursuits on a big stage, supported by oodles of mental stamina.

And now this: open, honest, direct, accountable, forthright, brave, independent speech – I like it!

Uranus is currently in ARIES at 18 degrees of the sign, transiting the midpoint between Sharapova’s sun (the ego), and Mercury, Jupiter, and the north node.

The celestial weather is just right for such announcements! Read more about Mercury in Aries, here.

Maria is currently headed towards her Saturn Return, a maturation process if ever there was one, and noticeably she was born when the moon met watery Neptune in the sky.

We don’t have a birth time however the astrology of the stars proves interesting, yet again!

Mercury, Jupiter and the sun also aspect powerful Pluto in a pattern called a ‘yod’, another significant aspect in the chart. 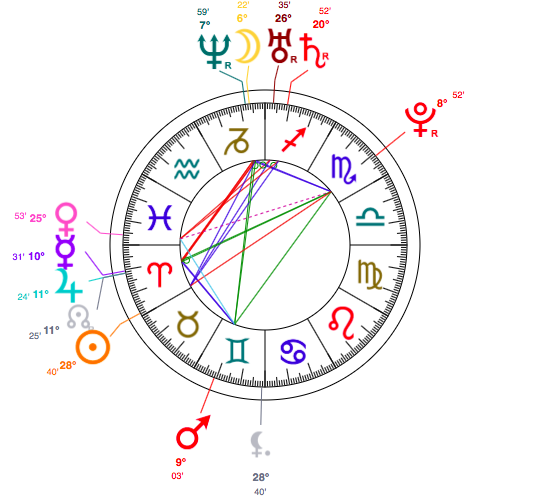