The Wheel Of The Year, 8 Festivals Of The Solar Year According To Astrology… 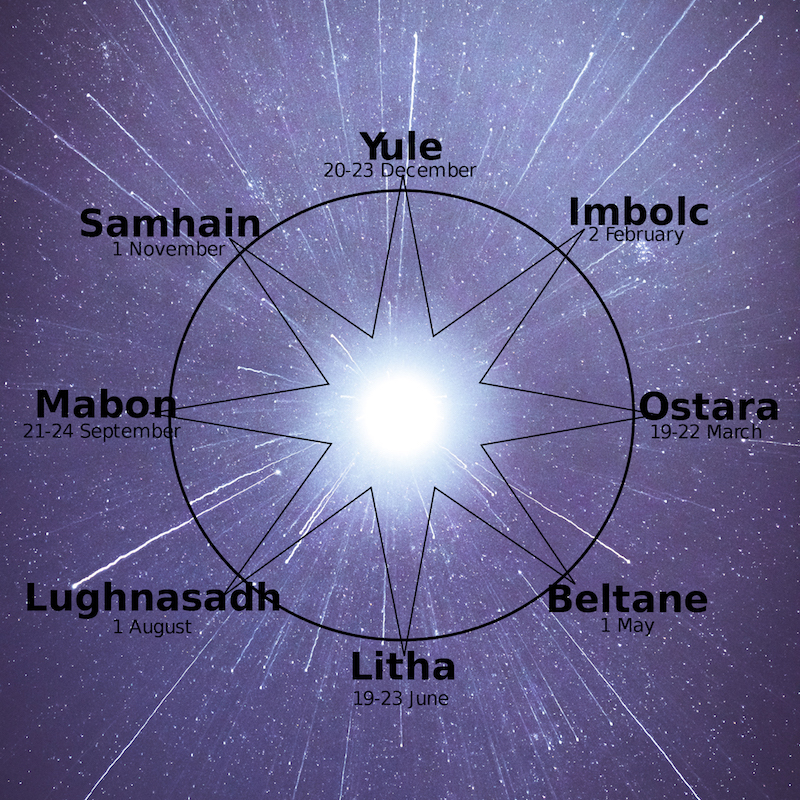 Wheel Of The Year Dates & Timing…

In astrology, a date is never just a date it’s a degree of the Zodiac.

The solstices and equinoxes are regarded as the Four Solar Fire Festivals, and are calculated with the sun as it reaches 0º of the CARDINAL SIGNS: Aries, Cancer, Libra, and Capricorn . Note the ZERO DEGREE below, signifying the turning of the wheel into each new season.

Cardinal is the modality of action and shifts of change, and these  four days show the entry to spring, summer, fall, and winter, with the new star sign season.

The Four Solar Fire Festivals Are…

[Across all of the Pagan Festivals above the date of ritual and celebration can change depending on the year, because it occurs in line with when the sun gets to the 0º point.] Dates on which festivals are celebrated are often flexible, aligned with the full or new moon.

The Four Lunar Fire Festivals Are…

Historically, they are known as a cross-quarter days, which are the four points between equinox and solstice. So, they occur when the sun is around these degrees of any of the Fixed Signs (Taurus, Leo, Scorpio, and Aquarius), and are known as the Four Lunar Fire Festivals (no, not a trendy new excursion you have to book a week off work for, but rather ancient ceremonial holidays).

The three harvest festivals are Lughnasadh, Autumnal Equinox and Samhain.

Read More About The 8 Festivals Of The Solar Year…

Also known as Spring Equinox, Vernal Equinox, and associated with the Goddess Ēostre.

Also known as May Day and Walpurgis Night, known for maypole dancing and the crowning of the Queen of the May; associated with Floralia, Goddess Flora, goddess of flowers,..

Also known as Summer Solstice, Midsummer; one of the four solar holidays, and the turning point when the sun shines longest…

Also known as Lammas, August Eve, and the first of three harvest festivals (others are autumnal equinox and Samhain). This is a festival and feast of thanksgiving for grain and bread, symbolising the first fruits of the harvest.

Also known as Fall Equinox, or Mabon, a ritual of thanksgiving for the fruits of the earth and a recognition of the need to share them to secure the blessings of the Gods during the coming winter months…

Also known as All Saints Day, Halloween, Day of the Dead, it’s a time to celebrate the lives of those who have passed on, and often involves paying respect to loved ones who have died.

Dedicated to Goddess Brigid or St. Brigit, the first stirrings of spring; a time of purification and spring cleaning in anticipation of the year’s new life.

In Times Of Stress… Self Care For The Zodiac Signs…

5 Ways To Work The Spring Equinox Into Your Beauty Rituals…

Full Moon – What To Do? Beauty Rituals To Harness The Lunar…