Signatures Of The Upcoming Cycle And What You Need To Know!

Mars will appear to go backward in the skies in 2020, passing through the zodiac sign Aries…

From my own observations, Venus, the Sun & Moon, Saturn, and Lilith are all interesting during this time, too. I’ve mapped out a diagram with 5 rings corresponding to the important moments during this cycle.

It’s no surprise that during this Mars Retrograde cycle in Aries there’s lots to the story. Low and behold, that story includes many references to the opposite sign, ‘Libra’, and to Venus – Mars’ counterpart of all the planets shall we say.

This suggests that we can work out relationship issues during this dynamic time – Mars is known as the planet of hot pursuit, and in Aries he’s particularly heady, ardent, and impulsive. With the Moon, Mercury and Venus showing up at key times we can assume there are influences to cool the flames – a voice of reason amidst all this pyromania!

There’s a nice fire signature, to bolster the cycle, too.

Notice the Sun and Venus at the 3º point of Leo as Mars enters its shadow (2), and at the point of retrograde (3) both sextile to Moon and Mercury in Libra. 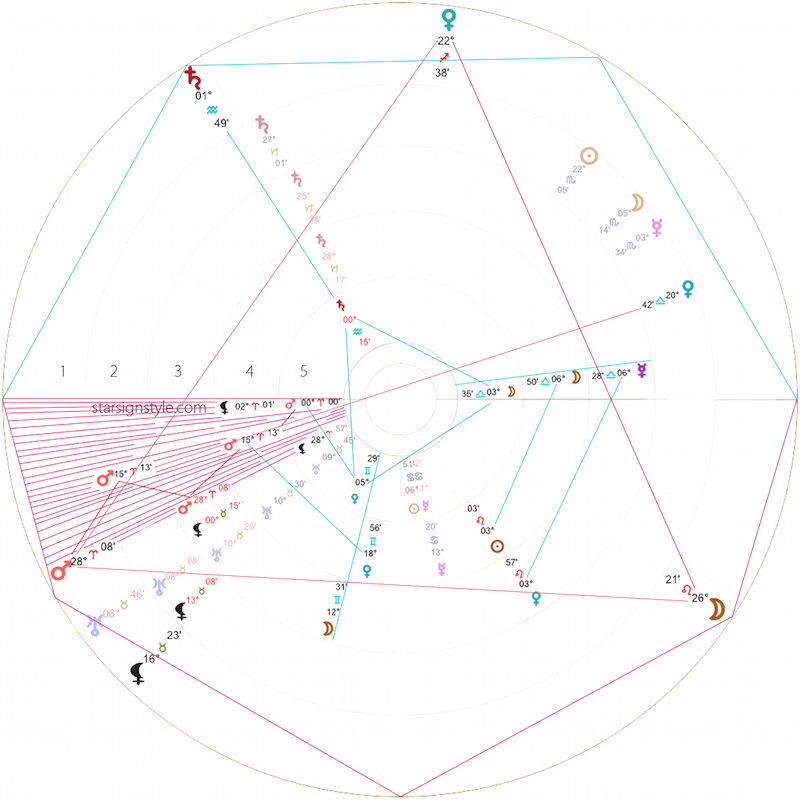 As Mars enters Aries, he will sextile [voice of reason & LOGIC Saturn in Aquarius, and as Mars clears its shadow Saturn will arrive at 1º49′ Aquarius, enjoying a dip back [retrograde] into Capricorn terrain in the meantime.

Mars in the arrms of Saturn – now in Aquarius… 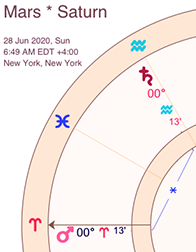 With the first flushes of enthusiasm – Mars at 00º Aries – injected into Saturn’s ether (sextile to Saturn), it would be nice to think that the motivated planet of drive, will and enthusiasm will somehow play into Saturn’s tour of Aquarius.

If we take action at the end of June (for our fellow man, and Aquarian principles) then perhaps we will put a rocket or positive plan in place.

However, by the time the retrograde has been and gone (with Saturn hiding out in Capricorn, throughout the remainder of 2020), Saturn will be ready to re-enter – but this time with a square to Mars, who will then be ready to move ahead into Taurean pastures.

It’s worth noting the path of Lilith during this retrograde cycle, too, as she’s positioned at 28º as Mars enters Aries, then paves her way back to the start before heading into Taurus.

As Mars appears Direct she will be opposite the Moon to 1º – a tight oppositiion, which is readying itself for the New Moon in Scorpio.

I might say then, that this is reason to believe this retrograde will be even more exciting, thanks to the weaving in and out of Lilith, and the signficant build up to the Scorpio New Moon… Don’t forget that Scorpio’s traditional ruler is Mars, and thankfully, at this lunation Mars wil at last be direct! Phew!

Here’s the chart for the Leo New Moon before Mars appears retrograde, Venus is sextile Uranus, and there’s a strong fire trine too.

How Will This Mars Retrograde Play Out For You?

Of course, this cycle of Mars Retrograde will affect different people in different ways. It’s worth noting if you have planets at 15º or 28º Aries, or any of the Cardial Signs, or just being familiar with your chart and referencing the points above may be interesting.

Discover where Mars falls in your chart in the free birth chart calculator.