I could totally rave and rave about Jessica Chastain.

A girl after my own heart, this Hollywood actress has a sprightly sun in Aries with Mercury and Venus too, and the moon at a powerful degree of expressive Gemini.

Film choices to date have been super Arian, including the The Martian, where a troop of astronauts fly to Mars, which is the planetary ruler of Aries, which features so dominantly in her chart.

Mars is also the traditional ruler of her rising sign ‘Scorpio’, so there’s a double emphasis on the warrior planet.

Crimson Peak, The Huntsman, A Most Violent Year, Lawless, Wild Salome and Woman Walks Ahead could also suggest an emphasis on mighty Mars too!

With Mars in Pisces and Neptune in harmony to Mercury there’s a gentle, artistic sentiment to her character.

Saturn completes a grand fire trine from its position in Leo.

Jupiter in Libra has seen many couples tie the knot but I particularly love the astrology of this multiple Aries responding to the planet, which natally conjuncts her moon!

Jupiter would have met her natal Pluto too, and will soon meet with her north node. 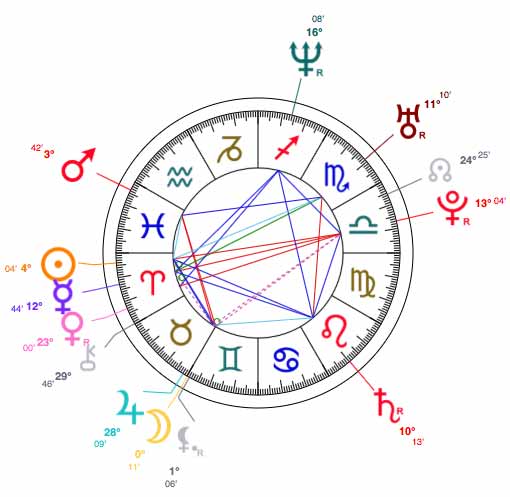