Take a quantum leap with the full moon! 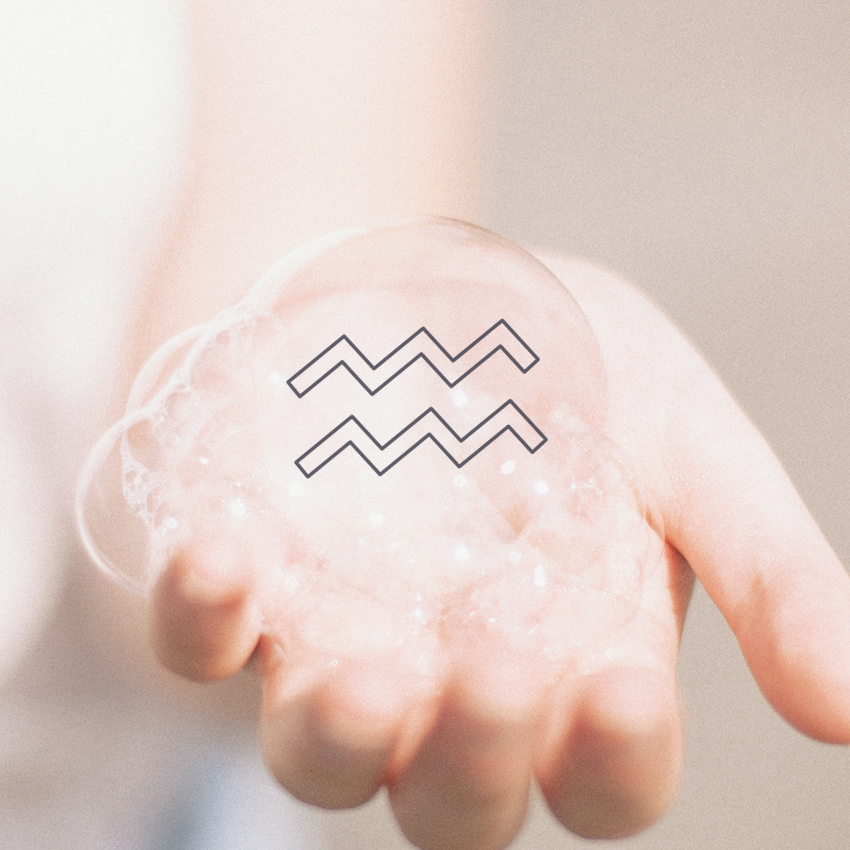 It’s Leo Season and so the Full Moon naturally shines bright in Aquarius. Read your horoscope here and use the stars on this day of illumination to really work the celestial weather…

1. Raise A Glass To Aquarius – And Dare To Be Different… 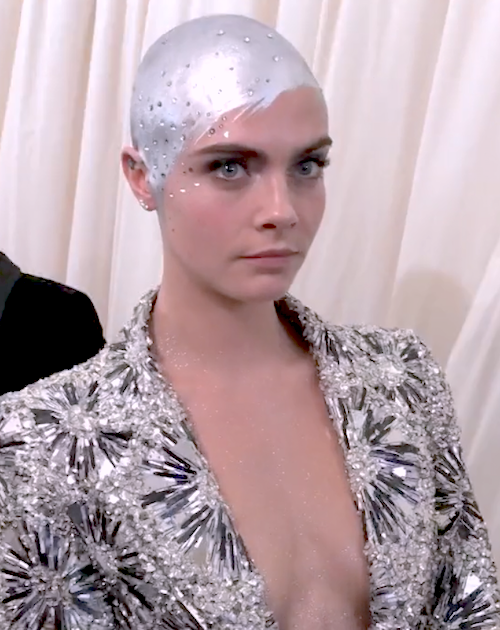 Take inspiration from the incredible Cara Delevingne, who boasts the Sun and Mercury in Leo, and Moon and Saturn in Aquarius.

The model and spokesperson doesn’t shy away from the spotlight and uses it to promote equality for all! Openly pansexual, her Twitter byline reads: EMBRACE YOUR WEIRDNESS! 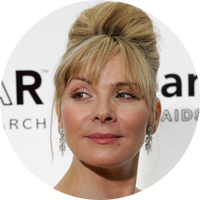 Take a quantum leap with the Full Moon in Aquarius – it’s totally the time to space out, and go your own way – just like Kim Cattrall, another star with this combination who isn’t afraid to go against the grain.

To thine own self be true!

Of all the characters in Sex and the City, Cattrall was the most daring, with her bold, dazzling Leo Sun, and refreshing Aquarian Moon! 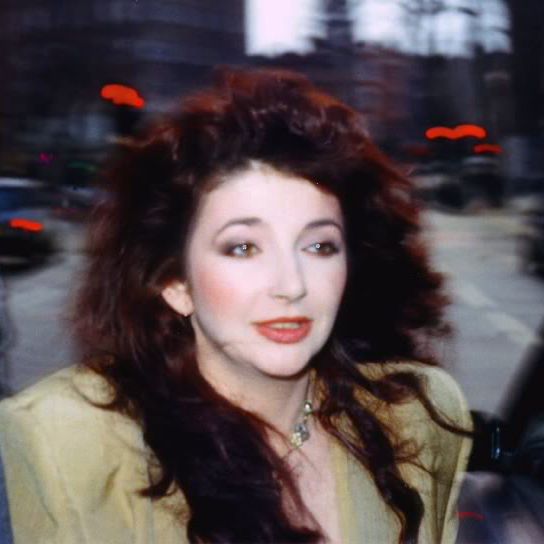 Kate Bush is another eccentric figure born with a Leo Sun, Aquarius Moon.

Praised for her unconventionality, she has a Sun-Uranus conjunction – see her chart here! 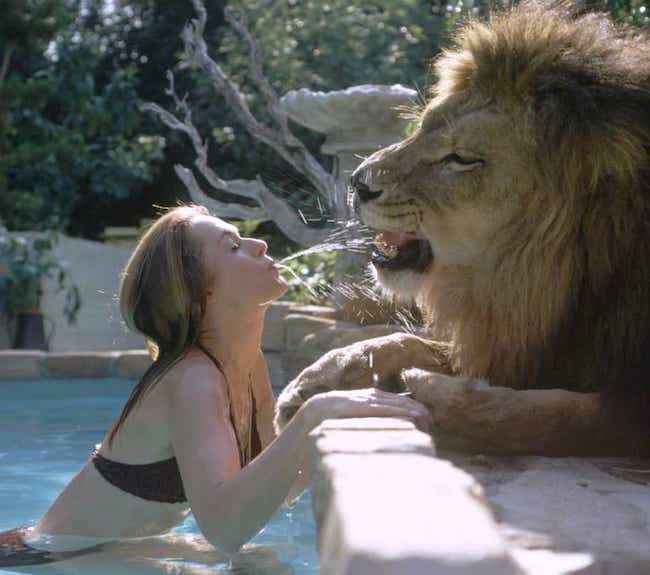 This is the combination in the stars that’s able to carry water – consciousness – and face strength; Aquarius is the Water Bearer who brings a jug of nourishing water to the masses, and Leo is the lion, regal, majestic and fiercely entertaining! The King of the Jungle.

I love this image of Melanie Griffith with her pet lion, presenting water to the beast!

It’s a SUNNY day in the cosmos, as it’s Leo Season – notice where you’re experiencing heatwaves.

But emotionally (Aquarius Moon) we could be cool, calm and collected, acknowledging a moment akin to awakening from winter. Aquarius Season is when all is cold, brisk and blue – Saturn moved into Aquarius around Winter Solstice 2020, what’s evolved since then?

Put the spotlight on the collective group of ‘people’, the Masses, feedback from the crowd, the audiences vote and what “we all want”, collectively. Yet know Leo holds star quality, the solo focus & spotlight.

With this polarity in the stars – and the luminaries lighting up these two signs, we can harness a little drama and an audience of cheerleaders…

2. Get Online And Find Your Tribe… 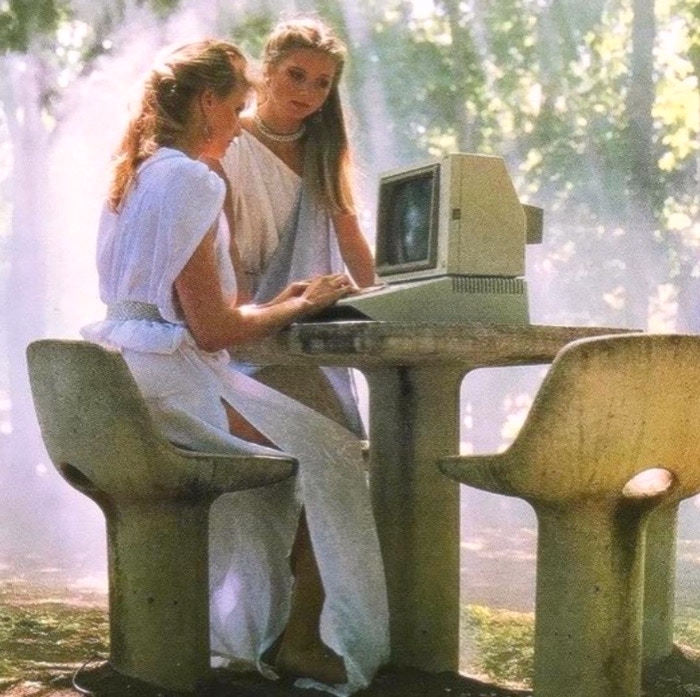 One of the gifts of our modern age (and some might say ‘the Age of Aquarius‘) is our ability to utilise the air-waves to connect to people. 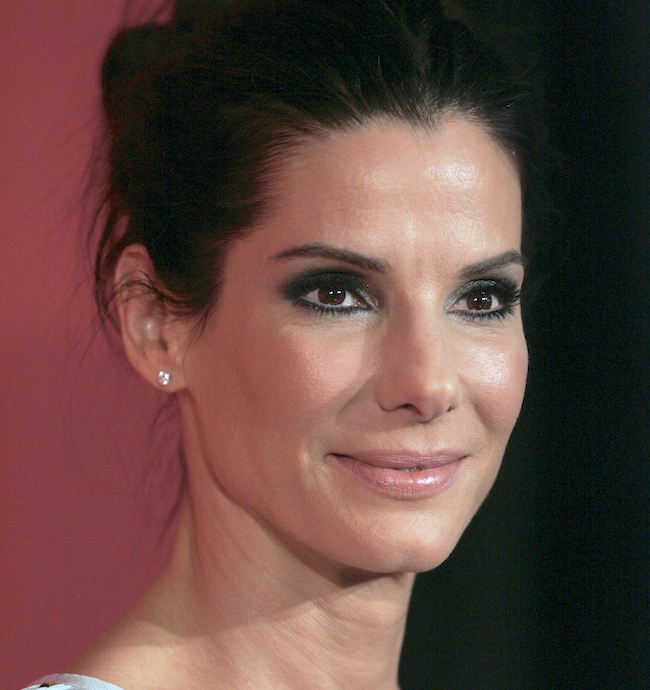 Interestingly, actress Sandra Bullock is a Leo with Moon in Aquarius who helped bring online interests to the masses (during Neptune in Aquarius, naturally!)

She starred in the Net, Hackers, and was a poster child for Tech Genius.

At this time we can confidently allow our fingers to grace the keyboard, at home and at ease with our ‘people’.

Aliens and space travel is totally Aquarian too!

Although unidentified, mysterious objects and the unknown is very Neptunian, venturing out to get a birds eye view (in the orbit and ether) is very Aquarius!

We can watch the X-Files, starring two Leo’s with Aquarius Moons – Moulder & Scully!!

Dream Team David Duchovny and Gillian Anderson are both born with the Sun in Leo, and Moon in Aquarius…

Aquarius is the most progressive of the zodiac sign, concerned with how to improve life on earth for her fellow woman!

She also has a flair for futuristic fashions, including fluorescent touches! 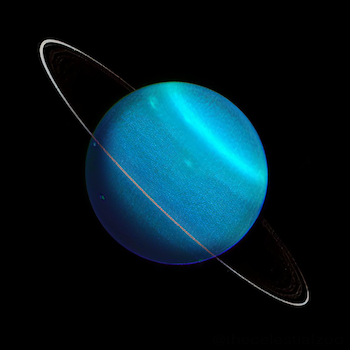 Ruled by Unusual Uranus, honour Aquarius fashion on the full moon with electric feels and bright splashes of neon. Get into it for the full moon… 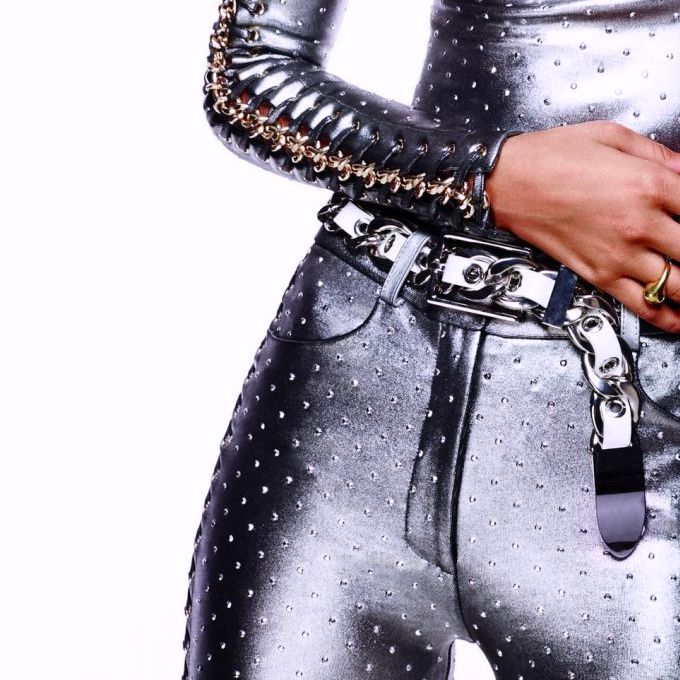 The most sociable sign in astrology, Aquarius has a following to rival the most popular stars.

Air is the element of Space and Sociability.

The airwaves carry our messages and each of the three air element zodiac signs deals with information and communication in a different way.

Gemini connects information, curiously picking up skills and data. Libra drives with a sociable force, making everything civilised along the way. Aquarius is the fixed one.

She has conviction and loyalty towards her vision, confidence in her beliefs. A Full Moon illuminates, making it easy for us to see the stark truth and reality – use it’s spotlight to reveal growth in yourself. Use it to celebrate and assert change.

And Turn Up The Turquoise! Align with Aquarius energy using their lucky colour, turquoise… 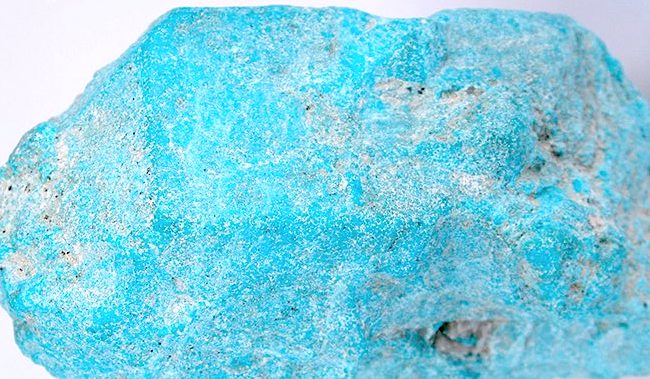 A touch of turquoise in your look stands out!

5. Use Avante Garde Aromas And Plants… 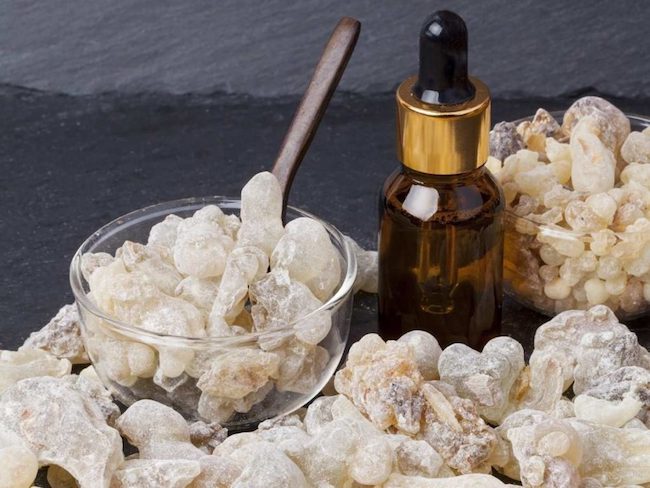 Aquarius has ownership over blue and white flowers as well as Acacia, Frankincense and Myrrh.

Also the Gardenia fragrance, and the bird of paradise plant. 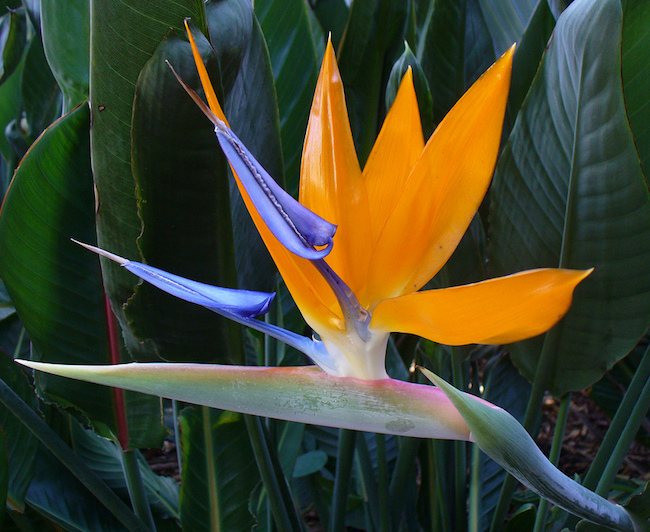 Use Frankincense in your full moon massage! 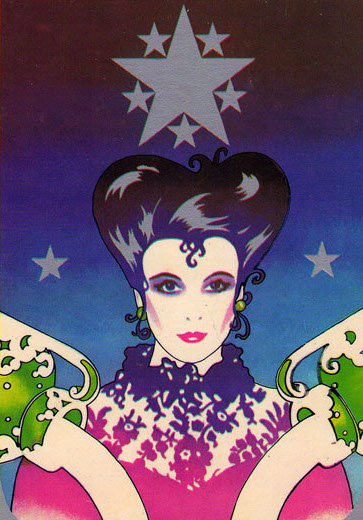 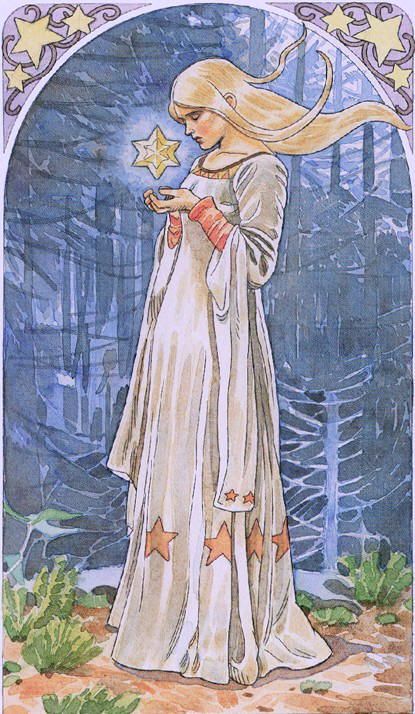 Use its energy to celebrate the subconscious and the conscious, allow magic to flow around you with a heart full of hope, and a soul that’s uplifted to the highest highs.

At this Full Moon, realise dreams – and aspirations – really can come true.

Elevate wishes made on the New Moon in Aquarius, and ways you’ve reached toward the stars.

Celebrities Born On A Full Moon In Aquarius? 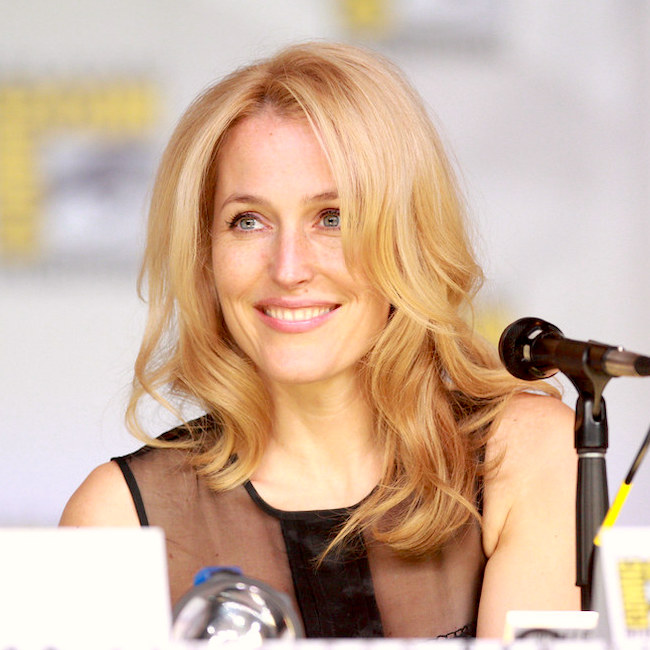